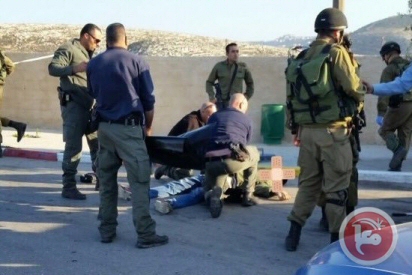 Israeli forces shot and killed a Palestinian teenager on Monday afternoon after he allegedly attempted to stab an Israeli soldier at the Huwwara checkpoint south of Nablus, Israel’s army said.An Israeli army spokesperson said that as the Palestinian approached the checkpoint, he ‘drew a knife and attempted to attack a soldier.’

She said that the soldier ‘responded to the immediate danger’ and opened fire on the Palestinian, ‘resulting in his death.’

A Palestinian woman identified as Samah Abd al-Mumen Ahmad from Ammuriya village was shot in the head in the crossfire, witnesses said.

A bus driver, Adham al-Sharfa, stated: “I saw what happened with my own eyes as Israeli soldiers opened fire at a youth for attempting to stab an Israeli soldier and then several Israeli soldiers arrived and shot the youth more than 10 times and he fell to the ground.”

Palestinian security sources said Samah was shot in the head while sitting inside her car near where the incident occurred.

Huwwara checkpoint lies just south of Nablus on a major thoroughfare for both Palestinians as well as Israelis living in illegal settlements in the northern occupied West Bank.

On Sunday, an Israeli settler ran over a 16-year-old girl at Huwwara checkpoint before getting out of his car and shooting her dead, saying that he believed she was about to carry out a stabbing attack at the checkpoint.

The settler was later identified by Israeli media as Gershon Mesika, the former head of the Samaria Regional Council, which represents Israel’s illegal settlements in the northern West Bank.

Later on Sunday, Israeli forces imposed a curfew on Huwwara village after a Palestinian threw a Molotov cocktail at a settler’s vehicle passing through the village, Israel’s army said.

Also on Monday, Palestinian man was shot dead after stabbing and killing an Israeli settler on Route 443 west of Ramallah, Israel’s army said.

An Israeli army spokesperson said that a ‘Palestinian murdered an Israeli and wounded another in a stabbing attack’ with the injured victim evacuated for treatment.

Israeli forces responded on site to the incident and shot dead the Palestinian attacker, the spokesperson added.

The Palestinian Ministry of Health identified the suspect as Ahmad Jamal Taha, 16, from the Qutna village near Ramallah.

The attack took place at a gas station along Route 443 west of Ramallah, with the Magen David Adom ambulance service treating the wounded at the scene.

The latest incident brings the total death toll on Monday to three Palestinians and one Israeli after a 16-year-old Palestinian girl was shot dead in Jerusalem earlier in the day, after allegedly carrying out a stabbing attack near the Mahane Yehuda market.

Israeli media initially reported that two Israelis were wounded in the alleged attack, although a spokesperson for Hadassah hospital later confirmed that one of those injured was a 70-year-old Palestinian resident of Bethlehem, who had a light stabbing wound in his back.

The other was a 27-year-old Israeli security guard who was shot in the hand by friendly fire.
An Israeli security guard, who had been driving near the Mahane Yehuda market on Jaffa Street, got out of his car when he saw the two girls and quickly shot dead 16-year-old Hadeel Wajih Awwad and severely wounded her cousin, 14-year-old Norhan Awwad.

Editor’s note: In recent months, a bizarre number of such incidents have been documented. Although many reports would seem genuine at first glance, discrepancies in details and outright admission of mistaken intent has caused many to question their authenticity.