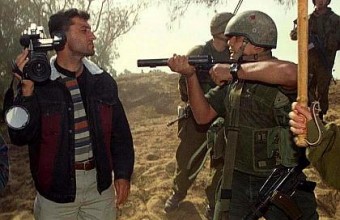 Israeli forces manning a military checkpoint, set up near al-Ibrahimi mosque in Hebron, assaulted two correspondents working for WAFA news agency and B’Tselem, the Israeli human rights center.WAFA correspondent, Jwed Tamimi, and B’Tselem correspondent, Manal Da’na, were both assaulted and roughly handled by Israeli soldiers after they crossed through a checkpoint placed near the Ibrahimi Mosque, reported Tamimi.

Tamimi said Israeli army forces detained them for about 30 minutes after they crossed the checkpoint, where they were roughly handled and shoved by soldiers, and prevented from reaching their destination.

He noted that they were on their way to al- Ibrahimieh School, near the Ibrahimi Mosque, in order to cover activities marking the United Nations Convention on the Rights of the Child (UNCRC), which was adopted on November 20, 1989.

During October of 2015, Israeli army forces committed a total of 1,122 assaults against both males and female journalists in the West Bank and Gaza Strip, according to a story issued by the Palestinian Center for Development and Media Freedoms on November 22, 2015.

These attacks, according to WAFA, constitute a clear violation of international law and the Universal Declaration of Human Rights.

Palestinian journalists have the right to cover events according to the Universal Declaration of Human Rights article Number 19, which states “Everyone has the right to freedom of opinion and expression; this right includes freedom to hold opinions without interference and to seek, receive and impart information and ideas through any media and regardless of frontiers.”