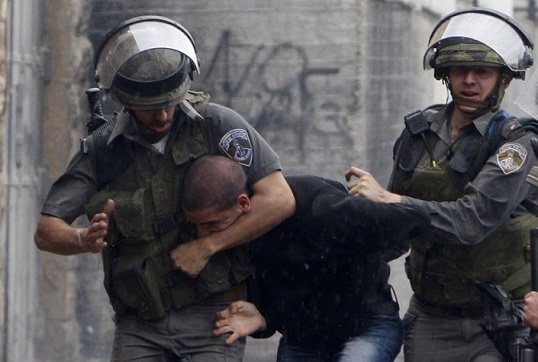 Israeli soldiers invaded, on Tuesday at dawn, several Palestinian communities, in different parts of the occupied West Bank, broke into and searched dozens of homes, and kidnapped nineteen Palestinians.In the southern West Bank district of Hebron, the soldiers kidnapped nine Palestinians, including one child.

The Popular Committee in Hebron said the soldiers kidnapped Saif Salim Roshdi, 15 years of age, and Ezzeddin Mahmoud Abu Rayya, 21, from their homes in the al-‘Arroub refugee camp.

In addition, the soldiers invaded the Sammoa’ town, and kidnapped Ahmad Abdullah Salameen, 51, and his son, Abdullah, 24 years of age.

Coordinator of the Popular Committee Rateb Jabour, said the soldiers installed a roadblock on the eastern road of the al-Karmel village, leading to Masafer Yatta, and searched dozens of cars.

He added that, several days ago, the soldiers blockaded all roads leading to Masafer Yatta with sand barriers, except for its main entrance.

The soldiers also searched and ransacked many homes in Surif town, northwest of Hebron, in addition to Ethna town, the al-Fawwar refugee camp and Hebron city, before stopping and searching dozens of cars while investigating the ID cards of the Palestinians.

Furthermore, the soldiers kidnapped four Palestinians in the northern West Bank city of Nablus, and one in the Balata refugee camp.

The soldiers searched many homes and kidnapped Emad Amer, Abdul-Hakim Qadah, Ismael Esteitiyya, and Rami Nasser, all from Nablus city, in addition to Zohdi Srouji, from his home in the Balata refugee camp.

They also searched many homes, including the home of a political prisoner, identified as Amjad ‘Oleywi, from Nablus city.

Five more Palestinians were taken prisoner on a sudden roadblock the soldiers installed near Deir Ballout town, west of the Central West Bank district of Salfit.