€10 Million Made Available to UNRWA by European Commision 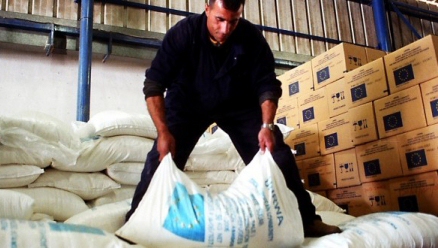 Yesterday, the European Commission announced an additional €10 million in support to UNRWA, in order to keep schools open, and to maintain core services for Palestinian refugees..According to the official press release, this contribution, which comes in addition to the €10 million granted in October, brings the 2015 EU support for UNRWA’s General Fund up to €102 million.

The High Representative Federica Mogherini said, according to PNN:

“UNRWA is doing invaluable work with the Palestinian children whose experience has been marked too often by war, violence, displacement and insecurity. Thanks to UNRWA, their right to go to school and build a better future for themselves and the region can be guaranteed. The EU will continue to stand by UNRWA as it provides Palestine refugees not only with critical quality services, but also with stability and hope for the future in very difficult circumstances“.

“I am delighted that more Member States are joining the EU PEGASE mechanism in support of the Palestinians. Today’s additional funds will benefit the most vulnerable Palestinian families, which remain in dire need of assistance. I am also happy to announce the additional €10 million EU contribution, thanks to which UNRWA will be able to keep schools open and provide Palestinian refugees with access to health and social services”.

Most of the EU’s assistance to the Palestinian Authority (PA) is channelled through PEGASE Direct Financial Support. The PEGASE mechanism has the advantage of being secure, carefully checked with complete ex-ante and ex-post audits and is available free of charges for any donor.

Through PEGASE, the EU has contributed substantially to the recurrent expenditure of the Palestinian national budget (over €1.7 billion since its launching in 2008), with systematic, predictable and unconditional contributions to the payment of civil servant’s salaries and pensions and of social allowances to the poorest and most vulnerable Palestinians families. Through the programme for East Jerusalem hospitals set-up in 2013, the EU provides crucial support to avoid the collapse of those hospitals, which are amongst the few remaining Palestinian institutions in East Jerusalem and are providing key medical services to the Palestinian population.

The EU is the largest multilateral donor of international assistance to Palestine refugees, providing support to UNRWA since 1971. Between 2007 and 2014, the EU contributed over €1 billion ($1.44 billion) in support of UNRWA, including €809 million for the Agency’s core programmes and services. In addition, the EU has generously contributed to UNRWA humanitarian emergency appeals and projects in response to various crises and specific needs across the region.