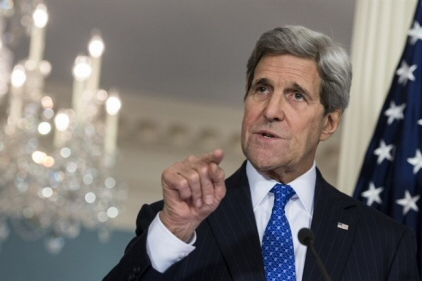 US Secretary of State John Kerry on Tuesday expressed support for Israel’s right to ‘defend’ itself from ‘terrorism’ and ‘senseless violence,’ in comments which will most likely be viewed in stark contrast with the reality faced by Palestinians.Speaking before a meeting with Israeli Prime Minister Benjamin Netanyahu in Jerusalem, Kerry said: ‘It is very clear to us that the terrorism, these acts of terrorism which have been taking place, deserve the condemnation that they are receiving.’

He expressed his ‘complete condemnation for any act of terror that takes innocent lives and disrupts the day-to-day life of a nation.’

Kerry made no mention of either Palestinians or Israel’s nearly 50-year military occupation of the Palestinian territory in the comments, according to Ma’an News Agency.

At least 93 Palestinians have been killed by Israelis since the beginning of October. While Israel alleged many of those were attempting to attack Israelis when they were shot, Palestinians and rights groups have disputed Israel’s version of events in a number of cases.

The attacks that have taken place — claiming the lives of 19 Israelis — have been accompanied by a wave of popular unrest that has swept the occupied Palestinian territory and Israel.

While Israelis have sought to blame the unrest on religious incitement, Palestinians have pointed to Israel’s occupation and ongoing settlement program, no prospect of a political solution, and a deep sense of frustration and despair.

Kerry said that ‘Israel has every right in the world to defend itself. It has an obligation to defend itself. And it will and it is. Our thoughts and prayers are with innocent people who have been hurt in this process.’

He said that he wished to talk with Netanyahu about a joint bid ‘to push back against terrorism, to push back against senseless violence and to find a way forward, to restore calm and to begin to provide the opportunities that most reasonable people in every part of the world are seeking for themselves and for their families.’

Israeli daily Haaretz reported, on Tuesday, that Netanyahu is seeking US approval on construction inside Israel’s illegal settlement blocs in return for possible concessions in the occupied West Bank.

A senior Israeli official told the newspaper that the US wanted Israel ‘to implement a package of meaningful measures in the West Bank,’ while Netanyahu had ‘made it clear that we want American recognition of the settlement blocs and of the fact that we can build there.’

Before meeting with Kerry, Netanyahu said the US was ‘a friend in our common effort to restore stability, security and peace.’

The prime minister added: ‘There can be no peace when we have an onslaught of terror — not here or not anywhere else in the world, which is experiencing this same assault by militant Islamists and the forces of terror.’

He said that the international community should support its fight against Palestinians. ‘It’s not only our battle, it’s everyone’s battle. It’s the battle of civilization against barbarism.’

Netanyahu previously joined Israeli leaders in comparing Palestinian acts of violence to deadly attacks in Paris earlier this month that claimed the lives of 130 civilians.

After those comments, senior PLO official Hanan Ashrawi condemned Netanyahu for ‘cynically exploiting’ the Paris attacks ‘to create a misleading linkage and to justify Israeli state terror against the Palestinian people, while presenting Israel as the victim.’

She said that ‘in fact, Israel is an occupying power’ that has ‘habitually terrorized Palestinian civilians, stolen their land and resources, and demolished their homes.’

Ashrawi slammed the Israeli prime minister for ‘disingenuously claim(ing) self-defense while labeling any form of Palestinian reaction as ‘terrorism.”

She added: ‘Nowhere else is a ruthless occupier presenting itself as the victim and justifying its atrocities as self-defense.’

Also of interest: Pollard Released After 30 Years in Prison

Israel Requesting Over 5 Billion in US Military Aid

Official: US Cutting Aid to PA