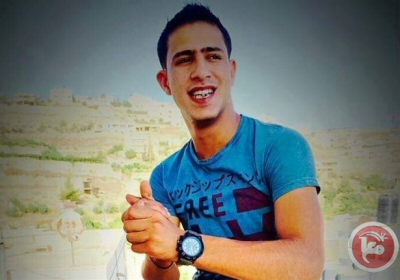 A 19-year-old Palestinian was shot and killed at al-Arroub refugee camp in northern Hebron, Thursday, after Israeli soldiers invaded the it.

He is the 3rd Palestinian to be killed during the day; Red Crescent officials said that Khaled Mahmoud al-Jawabra, 19, was shot twice in the stomach by Israeli soldiers and later died from his injuries in the al-Ahli hospital in Hebron.

The teenager was shot during after the army fired many live rounds, rubber-coated steel bullets and gas bombs, at Palestinians, protesting the invasion.

An Israeli army spokesperson said ‘a Palestinian with a lit Molotov cocktail in hand attempted to hit vehicles off route 60 in the area of al-Arrub, forces on site responded to the immediate threat, shooting 22 caliber rounds, thwarting the attack.’

The main entrance to al-Arrub camp has been entirely closed for the past few days, with soldiers deployed at other entrances and in surrounding areas.

An ambulance attempting to reach al-Jawabra was forced to take a lengthy route to arrive at the scene of the shooting.

Al-Aroub refugee camp lies along Route 60, a major West Bank road that Israeli settlers regularly use to reach a cluster of illegal Israeli settlements in Hebron, and the camp has been site to frequent clashes with Israeli military over the past month.

Earlier Thursday, a 21-year-old Palestinian, Yahya Yosri Taha, was killed by Israeli soldiers when clashes broke out during a search and arrest raid in the town of Qatanna.

Locals said that Taha was shot in the head and left on the ground bleeding for more than an hour-and-a-half while Israeli soldiers denied Palestinian ambulances access to the young man to administer medical treatment.

Hours later, Israeli forces shot and killed a Palestinian at the Za’atara (Tappuah) military checkpoint south of Nablus after he reportedly attempted to stab an Israeli soldier, Israeli police said.