Many Palestinians Injured In Hebron 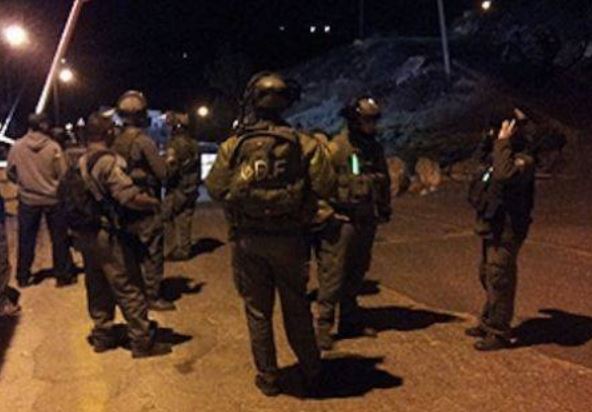 Two Palestinians were shot with live rounds; one with a rubber-coated steel bullet and several others suffered the effects of tear gas inhalation, during clashes with Israeli soldiers invading the al-Fawwar refugee camp, south of the southern West Bank city of Hebron.Several Israeli army vehicles invaded the refugee camp, through its western entrance, and fired gas bombs, and live rounds on a number of homes, while trying to reach the home of Mohammad Shobaki, who was shot by the army, and died of his wounds, Wednesday.

Eyewitnesses said Palestinian medics moved many residents to Abu al-Hasan al-Qassem hospital, in Yatta nearby town, after the soldiers prevented them from leaving the town through its main road while trying to reach Hebron hospitals.

The soldiers also invaded and searched many homes in the refugee camp, and occupied the rooftops of a number of invaded buildings.

Also on Thursday, a Palestinian man, identified as Samer Hasan Seriesi, 51 years of age, was shot dead by Israeli soldiers, at the Za’tara military roadblock, south of the northern West Bank city of Nablus. The man was left to bleed to death, while Israeli medics stood, in the distance, with the soldiers.

In addition, the soldiers invaded the town of Qotna, northeast of occupied Jerusalem, early Thursday morning, shooting and killing one Palestinian, identified as Yahya Yosri Taha, 21 years of age, in addition to kidnapping and wounding many residents.

The deaths of the two Palestinians bring the number of Palestinians, killed by Israeli fire since October 1 to 101, including 22 children and four women; one of the slain women, 30 years of age, was killed along with her two-year-old child, in their own home, in an Israeli bombardment of the Gaza Strip.

Including A 10-Year-Old Child, Army Kidnaps Nine Palestinians In The West Bank