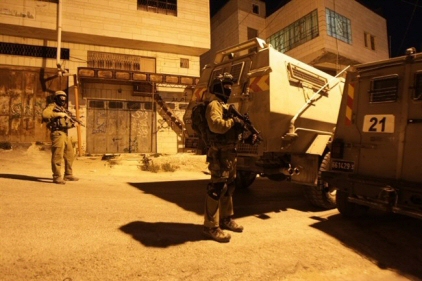 Israeli military forces ransacked several homes and a medical center in the occupied West Bank city of Bethlehem, before dawn on Saturday, locals said.According to locals, soldiers broke into al-Sadaq Medical Clinic, in the al-Madbasa neighborhood at the center of Bethlehem, removing the clinic’s main door and confiscating equipment.

The medical clinic is a part of al-Ihsan Charitable Association, it was added.

The Buja family said that soldiers broke into the homes of Ahmad Theib Buja, Muhammad Buja and Ashraf Abu Hlayyil, damaging the interior of the apartments.

Seperately, Israeli forces raided a science supply store, al-Maktaba al-Eilmia — located in the city center of Ramallah — for the second night in a row.

Locals said that around ten military jeeps entered the area before clashes broke out.

An Israeli army spokesperson had no immediate information on Saturday’s raids.

Israeli forces raided the same shop early Friday, breaking the doors of the shop and confiscating surveillance cameras, the owner of the center, Azmi Walid Abu Rahmeh said, at the time.

Five Palestinians were injured with live fire when clashes broke out during the night raid.
An Israeli army spokesperson denied the use of live fire at the time, saying Israeli forces entered Ramallah on ‘routine activity,’ and were met by dozens of Palestinians who ‘attacked forces by hurling rocks at them and blocking roads.’

The spokesperson said Israeli forces ‘responded using riot dispersal means in order to prevent and escalation of violence.’ The spokesperson added that ‘hits were confirmed,’ but said no live fire was used during the incident.

Israeli forces regularly carry out search and arrest raids in the occupied Palestinian territory, the UN Office for the Coordination of Humanitarian Affairs documenting a weekly average of 83 raids since the start of 2015.

Such raids have increased over the past few months, coinciding with a series of measures implemented by Israeli authorities in the wake of violence that increased in October.

The military raids have regularly taken place in areas under full Palestinian jurisdiction.