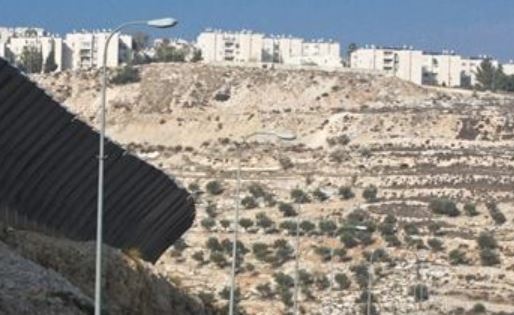 The Israeli “Construction and Planning Committee,’ of the Jerusalem City Council, has approved the construction of 891 units in Gilo colony, which was constructed on Palestinian lands, in the Bethlehem territory in the occupied West Bank. The military also confiscated 102 Dunams for ‘military purposes.’The recent approval in Gilo refers to the initial decision, signed in 2012, regarding new constructions in the hills, south of the colony.

Such approvals are first sent to the Regional Committee for approval, then the City Council issues the construction permits.

The Jerusalem City Council approved the construction on Wednesday, November 7, paving the road for the Construction Committee to render its final approval, back then, to 500 units.

The new planned constructions would lead to expanding Gilo towards the valley that separates it from lands owned by Palestinians in Beit Jala city.

The announcement of the new construction was supposed to be made earlier, but Israel delayed it nearly three weeks ago, until after the visit of Israeli Prime Minister, Benjamin Netanyahu, to the United States.

On November 17, Netanyahu and his government approved the construction of 500 more illegal settlement units in the Ramat Shlomo colony, in occupied East Jerusalem.

In related news, the Beit Sahour Municipality said the Israeli Authorities have decided to confiscate 102 Dunams of Palestinian lands belonging to residents of Beit Sahour, Bethlehem and Beit Jala, for what Israeli called ‘military considerations.’

The Israeli army said the lands that would be taken away from Beit Sahour, in Abu Ghneim, will remain in the hands of the military for ten years, under order number 322/156/1.

The Israeli decision refers to 70282 square/meters of lands near Gilo and Abu Ghneim (referred to as Har Homa), 3129 square/meters near military roadblock #300, in addition to 24148 square/meters in Abu Ghneim, southeast of Jerusalem.