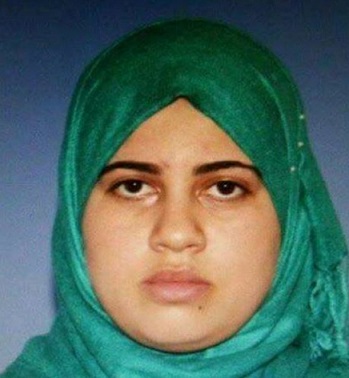 Palestinian medical sources have reported, on Wednesday afternoon, that a young woman, who was shot in the head, by the Israeli army fire, on November 23, while in a car with her father, died of her wounds.The sources said Samah Abdul-Mo’men, 20 years of age, died in the Beilinson Israeli Hospital.

She was first transferred to Rafidia Palestinian Hospital, in the northern West Bank city of Nablus, and was later moved to the Israeli medical center, due to the seriousness of her condition.

Samah, from ‘Ammouria village in Salfit District, was shot in the head after Israeli soldiers randomly opened fire, allegedly after Alaa’ Khalil al-Hashshash, 16, from the Balata refugee camp in Nablus, carried out a stabbing attack targeting Israeli soldiers, before they killed him.

Samah was with her father in a car, driving near the Huwwara roadblock when the soldiers starting firing at Palestinian cars, after the alleged attack.

Talking to Maan TV, the father said the soldiers never even signaled the car to stop, and just randomly opened fire in different directions.

On Wednesday at dawn, Israeli soldiers invaded the Qalandia refugee camp, north of occupied Jerusalem, shot and killed two Palestinians, and wounded at least four others.

The Palestinians Health Ministry said 125 Palestinians, including 25 children and six women, have been killed by Israeli fire, and more than 14.750 have been injured, since October 1.

Nineteen of the slain Palestinians, including a mother and her child, were killed in Gaza, and one in the Negev.

Among the wounded are 4695 who were shot with live fire and rubber-coated metal bullets, 350 suffered fractures and bruises after being assaulted by soldiers and settlers, and 40 suffered burns.

The Ministry also stated that the army killed 25 children, and injured 562 others, including 333 who were shot with live fire, and 149 shot with rubber-coated metal bullets, while 53 children suffered fractures and bruises after being assaulted by Israeli soldiers and colonialist settlers. Dozens of children suffered the effects of tear gas inhalation, and some were directly shot with gas bombs.