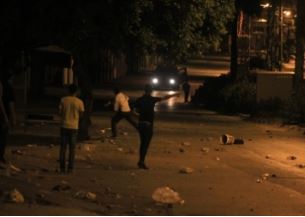 Medical sources in Bethlehem has reported that a Palestinian teen was shot and injured, on Wednesday at night, in the al-‘Obeyyat area east of Bethlehem, after Israeli soldiers invaded it, and clashed with local youths.The Red Crescent in Bethlehem said resident Ayman Amin al-Khatib, 19, was injured by army fire, and that local medics were unable to reach him after the soldiers obstructed them.

It stated that the medics tried to provide the needed medical treatment to the wounded Palestinian, but the soldiers prevented them from approaching him, and kidnapped him.

The extent of his injury remains unknown; the soldiers also confiscated the ID cards of the medics.

On Wednesday evening, the soldiers invaded Ya’bad town, southwest of the northern West bank city of Jenin, and occupied a home after forcing the family out.

Resident Yahya Khaled Abu Shamla said the soldiers invaded his home, and removed him and his family, adding that the property is close to the local park. The soldiers turned the property into a military post and a monitoring tower.

Ya’bad has been subject to various invasions, especially over the past two days, while the soldiers are frequently deployed in local Olive orchards.