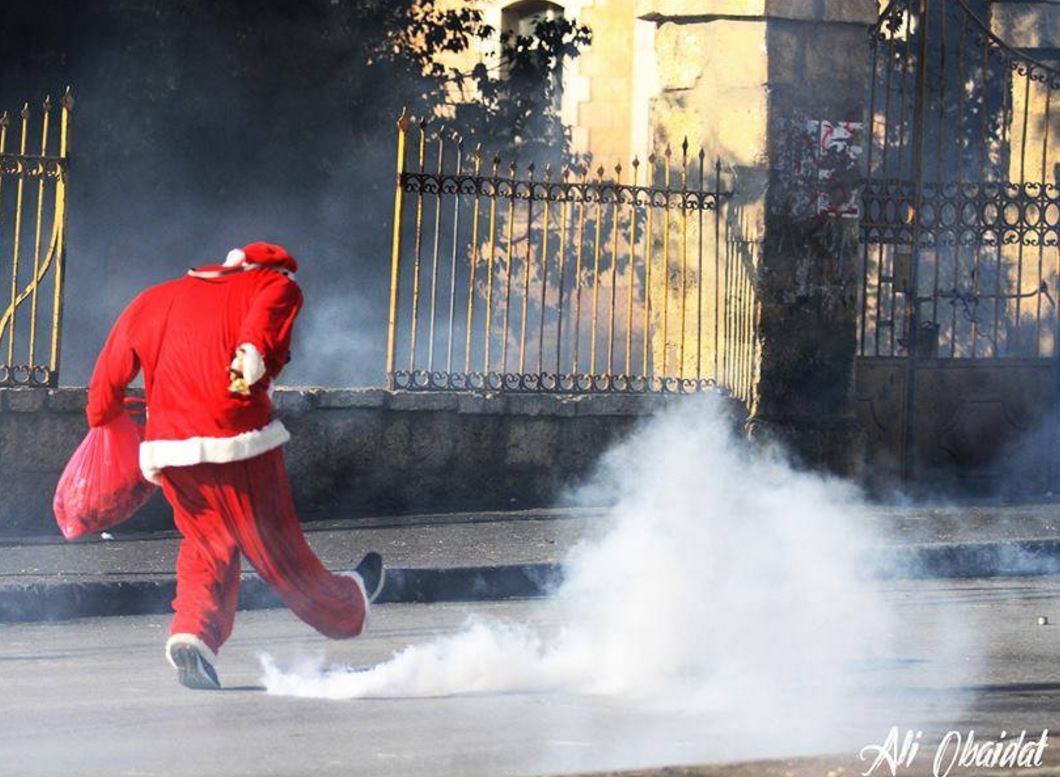 Medical sources have reported, Friday, that ten Palestinians were injured, and many suffered the effects of tear gas inhalation, near the northern entrance of Bethlehem city. The Palestinians were marching in the ‘Papa Noel’ procession, as part of Christmas celebrations in the city of Nativity.Update 16:24: The number of wounded Palestinians has arrived to ten; five with live rounds, and five others with rubber-coated steel bullets.

The Red Crescent said one of the wounded was moved to surgery, in Beit Jala Hospital.

The Palestinians, Christians and Muslims, marched as part of Christmas preparations and celebrations, in the holy city of Bethlehem, the birthplace of Jesus Christ, demanding real justice and peace in the holy land, and around the world, and an end to the illegal Israeli occupation.

The Red Crescent in Bethlehem said its medics provided medical treatment to a young Palestinian man, who was shot with a live round in his leg, and moved him to the Beit Jala Governmental hospital, suffering a moderate injury.

It added that two Palestinians were shot with rubber-coated steel bullets, one in his mouth, and the other in his leg, and that both were also hospitalized.

The Israeli military attack took place after dozens of residents marched towards the northern entrance of Bethlehem, demanding an end to Israeli violations and assaults, while some were dressed in Santa Claus outfits.

The soldiers fired dozens of gas bombs and concussion grenades on the Palestinians.

The Israeli attack led to clashes between the soldiers and local youngsters, while the army fired more gas bombs, concussion grenades and rubber-coated steel bullets.

In related news, two young men were shot with rubber-coated steel bullets, during clashes with Israeli soldiers in Teqoua’ town, east of Bethlehem.