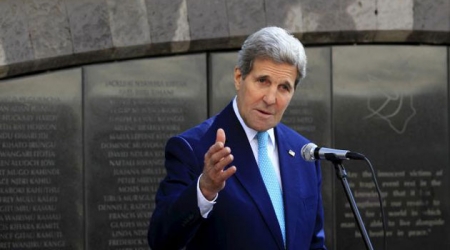 Many political observers saw U.S. Secretary of State John Kerry‘s recent visit to the Middle East — where he met both Israeli PM Benjamin Netanyahu and Palestinian President Mahmoud Abbas — as a declaration of the current U.S. administration’s formal withdrawal from the moribund peace process.A few weeks later, speaking at the Saban Forum in Washington DC, Kerry reiterated the administration’s commitment to a ‘two-state solution’ while warning that the region’s current precarious situation portended the emergence of a ‘one-state’ solution to the perennial conflict.
Kerry urged Netanyahu to prove his stated support for a two-state solution, noting that — despite the Israeli premier’s statements of support for the eventual emergence of a Palestinian state — many Israeli cabinet ministers continued to make assertions suggesting the contrary.

Khalil Shahin of the Palestinian Center for Human Rights told Anadolu Agency that, while the world was preoccupied with fighting ‘terrorism’, Israel continued to impose what appeared to be a one-state solution — or, more precisely, a ‘one-and-a-half state solution’ — to the conflict.

‘Israel has announced plans to deploy four new [combat] battalions in contact areas by the beginning of next year, bringing the total number of Israeli soldiers in the [Israeli-occupied] West Bank to more than 25,000 — the highest number since the Second Intifada [2000-2005],’ Shahin said.

Since the beginning of what some are calling a third ‘Intifada’ (or ‘uprising’) in the West Bank and East Jerusalem on Oct. 1, Israel has cordoned off several West Bank cities and Arab neighborhoods in East Jerusalem.

According to Shahin, Palestinians are plagued by Israeli army checkpoints set up around their cities and villages in the 40 percent of the occupied West Bank designated as Areas ‘B’ and ‘C’ under the 1993 Oslo Accords.

Israel, meanwhile, directly controls the 60 percent of the occupied West Bank known as Area ‘C’, which is now home to some 150,000 Palestinians and 350,000 Jewish settlers living in 135 Jewish-only settlements.

In East Jerusalem, Israel continues to confiscate Arab property and hopes to expel — and revoke the residency — of around 230,000 Palestinian residents, said Shahin.

According to Shanin, Israel wants to put nearly 3 million Palestinians in a handful of unconnected cantons while maintaining control over most of the West Bank, including the Jordan Valley and all water resources.

Israel, he said, was killing Palestinians and confiscating their land in the occupied West Bank — with a view to formally annexing it in the future — on the pretext of ‘providing security’ for Jewish settlers.

In 2005, following its ‘disengagement’ from the Gaza Strip and the beginning of the construction of its West Bank separation barrier, Israel embraced a new policy, which, according to Yossi Alpher, an adviser to former Israeli Premier Ehud Barak, could be called a ‘one-and-a-half-state solution’.
The best Israel could do for itself, Israeli officials realized at the time, was ‘manage the conflict’ in a manner designed to maintain its integrity as a ‘Jewish’ state, Alpher explained.

Khalil al-Tafakji, a Palestinian demographics expert, believes Israel set the borders for a series of unconnected Palestinian cantons in the West Bank by constructing the barrier, annexing more land in Area ‘C’ and establishing control of the Jordan Valley, the Palestinians’ historical breadbasket.
Meanwhile, al-Tafakji pointed out, Israel began blockading the Gaza Strip in 2007 and has since waged three devastating wars aimed at keeping the Hamas-run coastal enclave exhausted and isolated.

Al-Tafakji went to assert that the current Palestinian uprising had erupted not only because of Israeli escalations against the Al-Aqsa Mosque, but also because of the Palestinians’ refusal to accept the current status quo — especially after it became clear that the peace processes had irrevocably collapsed.

The ongoing Palestinian ‘Intifada’ — in which more than 120 Palestinians have so far been killed — now stands against Israel’s plans for a ‘one-and-a-half-state’ solution and has dented the Jewish state’s hopes of taking advantage of Washington’s failure to revive a peace process that is clinically dead.

But, perhaps most importantly, the latest uprising has brought the Palestinian cause back before the eyes of the world.

See also: Netanyahu to Kerry: Israel Will Not Be A ‘Bi-national’ State