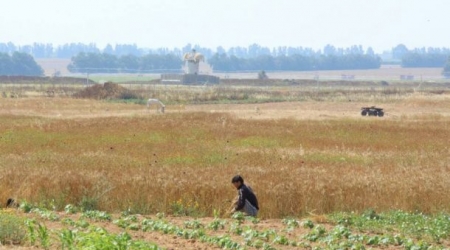 Israel’s military has confirmed reports that it destroyed Gazan agricultural crops near the security fence with Israel. The Israeli military told Anadolu Agency in a written statement, Thursday, according to Al Ray, that it sprayed a herbicide that “will cause the surrounding vegetation to wilt and prevent its growth.”

They Israeli military also claimed that the reason for spraying the crops was “to prevent the concealment of IED’s [Improvised Explosive Devices], and to disrupt and prevent the use of the area for destructive purposes.”

The confirmation came after Palestinian farmers near the border complained last week that for several days Israeli jets had flown over and sprayed a substance that was destroying their crops.

The Palestinian Ministry of Agriculture in Gaza said, last week, that around 3,000 square meters of crops were destroyed.

Gaza, which has been ruled by Palestinian resistance movement Hamas since 2007, lacks basic infrastructure and is subject to an Egyptian-Israeli blockade.

Since the 2013 coup against Mohamed Morsi, Egypt’s first freely elected president, Egyptian authorities have kept the Rafah border crossing — Gaza’s only gate to the outside world that is not under Israeli control — tightly sealed.

The ongoing closure of the crossing has served to deprive the Gaza Strip’s roughly 1.9 million inhabitants of vital commodities, including food, fuel and medicine.