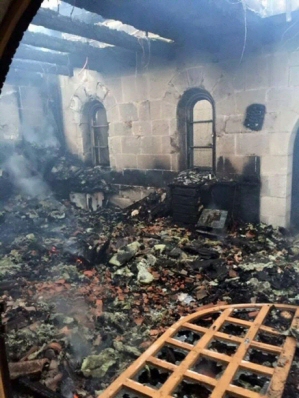 He also called for ‘making obstacles towards the expansion of Christianity and Islam in the Palestinian occupied city of Jerusalem,’ said the Days of Palestine on its website.

Gopstein has previously ‘called for a ban on Christmas celebrations in the country and the banishment of Christians, who he referred to as ‘blood-sucking vampires’, from the land,’ reported the International Business Times.

Gopstein is the head of the notorious extremist Israeli Jewish group of Lehava, which is responsible for insulting and harassing monks and nuns in the occupied Palestinian holy city.

‘Several Israeli groups are active in the occupied holy city regarding Judaization activities, including confiscating Islamic and Christian properties,’ said Days of Palestine.

In 2014, a group of mostly Jewish youth attacked the Church of the Multiplication’s outdoor prayer area along the Sea of Galilee, pelting worshippers with stones, destroying a cross and throwing benches into the lake.

The Israeli radio said that settlers set a car on fire in al-Thawri neighborhood, before the fire extended to seven other cars parked nearby.

It said that Israeli police registered the attack against an “unknown” suspect, although surveillance cameras in the area prove that it was carried out by settlers.

According to the Palestine Liberation Organization (PLO), there were 369 attacks by Israeli settlers against Palestinians from January 2015 to July 27, averaging more than 12 each week.

The report added: ‘From January to August 2013, compared to the same period in 2012, the number of casualties caused by Israeli security forces increased more than four-fold, as security forces intervene in settler attacks or resulting clashes between settlers and Palestinians to disperse Palestinians, rather than to protect them from attacks by settlers.’