Jerusalem; Army Kidnaps Two Palestinians From A Protest Tent In The Red Cross 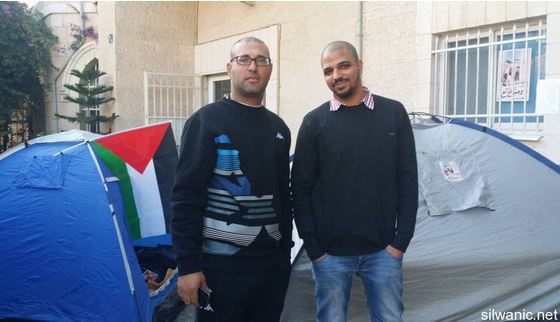 Israeli soldiers invaded, on Wednesday at dawn, the Red Cross building in occupied East Jerusalem, kidnapped two Palestinians, and briefly detained two others; the Palestinians have been living in a tent in the compound, protesting an Israeli decision to force them out of Jerusalem.The Wadi Hilweh Information Center in Silwan (Silwanic) said the soldiers stormed the Red Cross quarters, and kidnapped Samer Abu ‘Aisha and Hijazi Abu Sbeih.

Silwanic added that the soldiers also kidnapped two other Palestinians from the protest tent, but released them approximately two hours later.

Last month, the Israeli authorities issued an order forcing Abu Aisha and Abu Sbeih, out of their city for six months, without charges, under the guise of the ’emergency law.’ The two rejected the decision and took shelter in the Red Cross.

Also on Wednesday at dawn, the soldiers invaded several towns in the southern West Bank district of Hebron, searched many homes, kidnapped four Palestinians< and summoned many others, including a father and his two sons, for interrogation.