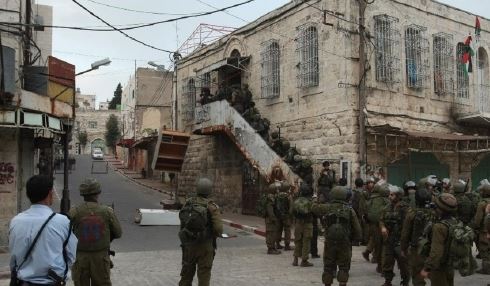 Israeli soldiers kidnapped, on Wednesday at dawn, three Palestinians in the northern West Bank district of Jenin, one in Bethlehem, and two others in the central West Bank district of Tubas.Several Israeli military vehicles invaded Jenin city, searched and ransacked many homes, and kidnapped three Palestinians, including a former political prisoner.

The army also invaded a residential building, belonging to members of Awartani family, violently searched all apartments, in addition to detonating water tanks on the rooftop, and kidnapped Mahmoud Hamad Awartani, 33.

Awartani is a former political prisoner, who was held for eight years in Israeli prisons, and is still suffering from earlier gunshot wounds in his chest, right thigh, and other parts of his body.

In addition, the soldiers kidnapped Nour Mahmoud Sa’adi, 22, from his brother’s home in a neighborhood in Jenin, and searched his father’s home.

Also, a Palestinian teenager, identified as Ahmad Salti Thawabta, 16, was kidnapped from his home, in Beit Fajjar town, south of the West Bank city of Bethlehem, after the soldiers invaded and searched the property.

Another Palestinian, identified as Ibrahim Sawafta, 18, was kidnapped from his home in Tubas town.

The soldiers clashed with many local youths, and fired many gas bombs; several Palestinians suffered the effects of tear gas inhalation; one child suffered minor burns in his arm, and was moved hospitalized.

The soldiers also invaded the Red Cross building in occupied East Jerusalem, kidnapped two Palestinians, and briefly detained two others; the Palestinians have been living in a tent in the compound, protesting an Israeli decision to force them out of Jerusalem.

Also on Wednesday at dawn, the soldiers invaded several towns in the southern West Bank district of Hebron, searched many homes, kidnapped four Palestinians and summoned many others, including a father and his two sons, for interrogation.