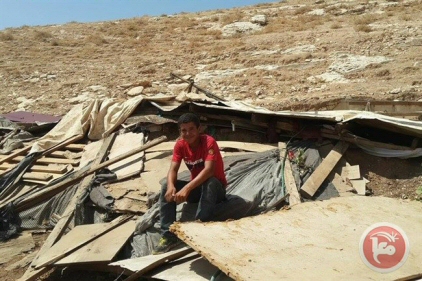 The families were not given any time to remove their belongings before the dwellings — made of steel, wood, and canvas — were torn down, he said.

‘I showed them a court decision banning demolition, but the officer in charge refused to see it and instead told me he had a demolition order from the Civil Administration,’ al-Jahalin said.

He said that the Israeli authorities had repeatedly attempted to persuade the families to leave their land. ‘They offers us blank checks and alternative land, but we refused and will continue to refuse to leave our land, and we will rebuild the dwellings this evening.’

Israel’s Civil Administration said in a statement that the families had refused to move to ‘legal buildings with appropriate infrastructure near their current illegal structures.’ As a result, it said two ‘illegal structures’ were demolished following ‘the required executive procedures.’

Abu Nuwwar is one of several Bedouin villages facing forced evacuation due to plans by Israeli authorities to build thousands of homes for Jewish-only settlements in the E1 corridor.

Although Israeli Prime Minister Benjamin Netanyahu was forced to suspend work on the housing units in 2013, settlement watchdog Peace Now reported last week that the Ministry of Housing has ‘quietly’ continued planning 8,372 homes in the corridor.

Settlement construction in E1 would effectively divide the West Bank and make the creation of a contiguous Palestinian state — as envisaged by the internationally backed two-state solution to the Palestinian-Israeli conflict — almost impossible.

Israeli activity in E1 has attracted widespread international condemnation, and Palestinian President Mahmoud Abbas has in the past said that ‘E1 is a red line that cannot be crossed.’