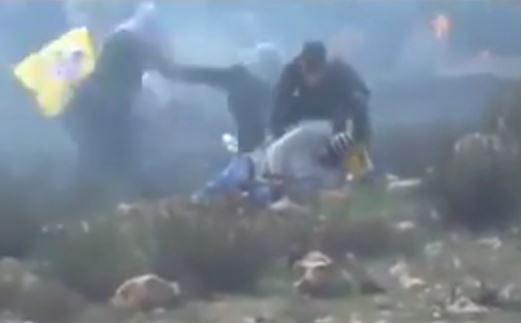 The contents clearly show how, unlike military claims of only firing at protesters to deflect harm to the soldiers, the incidents when the open fire orders were given, showed the soldiers faced no threats to their lives and safety.

The ‘shooter’ behind the camera chooses his targets, focuses his lens, and gives the orders to shoot the protesters he marked.

Every time the soldiers managed to shoot their ‘marked target,’ their cheers could be heard off camera.

The videos were shot in Silwad, al-Jalazoun, Qalandia, also near Ofer and Bet El.

Translation of The videos (Starting from second 28):

Where was he shot?

There he is, near the garbage bin, focus there, focus on the bin!

There he is, he is kneeling again,

Beautiful, he fell; he is injured, very nice; very nice; they are moving him away.

Go ahead, you have a green light to shoot,

No, No, he is injured; they are moving him away now…

Very Beautiful, he is hit!

There, near the garbage bin, do you see him?

He is preparing his slingshot…

Absolutely brother, you shot him.

Great job, you shot him.

I shot him as he was running…

OK, that one with the slingshot…

The soldiers relaxing in their military jeep.