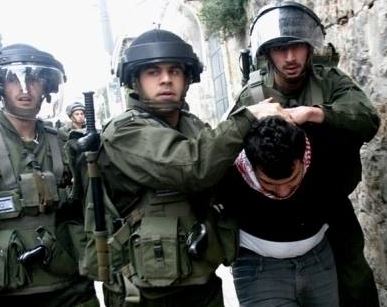 Israeli soldiers kidnapped, on Thursday at dawn, two young Palestinian men in the al-Yamoun town, west of the northern West Bank district of Jenin. One Palestinian kidnapped near Hebron, on Wednesday evening.Media sources in Jenin said the soldiers stormed and searched many homes in the town, and kidnapped Fadi Faisal Summoudi, 31, and Mohammad Ahmad Freihat, 23, after interrogating them and their families.

The soldiers also summoned Bassel Faisal Abu al-Haija, 19, for interrogation in the Salem military and security base.

On Wednesday evening, the soldiers kidnapped a Palestinian near the Iron Gate, installed by the soldiers on the eastern entrance of Beit Einoun town, east of the southern West Bank city of Hebron, and fired several live rounds to prevent other Palestinians from gathering in the area.

The Palestinian has been identified as Kamel Mohammad al-Juneidi, 25; the soldiers repeatedly struck and beat him before cuffing, blind-folding him, and took him to an unknown destination.