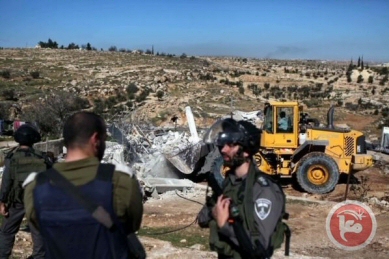 Israeli forces, on Thursday, demolished four greenhouses and a water well in the Jordan Valley of the occupied West Bank, locals said.Bassam Maslamani, an activist who monitors settlement activity in the Jordan Valley area, told Ma’an News Agency that three Israeli bulldozers, escorted by five military vehicles, demolished the greenhouses in the Anoun area, to the east of Tubas city.

Maslamani said Israeli authorities carried out the demolition of the structures on the grounds that they were built without a permit.

Israeli forces also demolished a water well Maslamani said was built by an Italian church in 2013 with the approval of Israeli authorities to provide locals and farmers in the Yizra area with water.

A spokesperson for the Israeli Coordination of Government Activity in the Territories (COGAT) said that ‘enforcement steps were taken against five illegal constructions which were built without permits in Tubas after completing the supervision process and issuing the relevant orders.’

The majority of the Jordan Valley is in Area C — under full Israeli military control — where Palestinian residents are rarely given permits to build or repair their homes, while Israeli settlements have expanded greatly in recent years.

Israeli policy in the area has resulted in ongoing demolition of homes and structures belonging to Palestinian residents.

The demolition of Fasayil in the central West Bank district of Jericho would leave 46 Palestinians, including 31 minors, homeless once again, as their homes have already been demolished several times over.