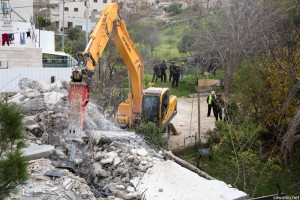 During the past week, Israeli forces killed nine Palestinians in the West Bank.

According to PCHR’s investigations on the other crime, at approximately 22:0, on the abovementioned day, Israeli forces deployed at the western entrance to Sa’ir village “Beit Aynoun”, east of Hebron, shot dead Khalil Mohammed Shalaldah (16).

Additionally, in excessive use of force, on 09 January 2016, Israeli forces stationed at al-Hamrah checkpoint, southeast of Tubas, killed two Palestinian civilians claiming that one of them attempted to stab Israeli soldiers searching cars at the aforementioned checkpoint. The killed civilians were identified as Ali Mohammed Hajj Mohammed (21), from al-Jadidah village, southeast of Jenin, a third year student at al-Quds Open University; and Sa’id Jawdat Abu al-Wafa (38), from al-Zawiya village, south of Jenin.

On 12 January 2016, Israeli forces killed Srour Abu Srour (19), a student at al-Quds Open University, from Ayda refugee camp, north of Bethlehem. Israeli soldiers opened fire at dozens of Palestinian civilians after the former moved into Beit Jala. It should be noted that Srour was killed while going back home from university.

On the same day afternoon, Israeli forces stationed at the eastern entrance to Beit Aynoun village that has been closed for a month with an iron gate, killed Adnan Mashni (17), from al-Shyoukh village, east of Hebron, and Mohammed Kawazbah (23), from Sa’ir village, east of the city. Israeli forces claimed that one of the two aforementioned persons attempted to stab an Israeli soldier.

On 13 January 2016, Israeli forces stationed at the coastal border area, northwest of Beit Lahia, north of the Gaza Strip, fired a shell at members of a Palestinian armed group that was carrying out a combat activity on the beach. As a result, one of them named Mousa Abu Z’aitar, from Jabalia refugee camp, was wounded with many shrapnel to the left side of the chest and was immediately killed. Moreover, two armed members sustained shrapnel wounds throughout their bodies and a fish trader sustained shrapnel wounds to the left side.

As part of Israeli attacks against Palestinian civilians, on 11 January 2016, Israeli gunboats stationed off the west of Beit Lahia village, north of the Gaza Strip, opened fire around Palestinian fishing boats sailing within three nautical miles. They also chased some of them and pumped water over them to get them drowned. However, neither casualties nor material damage were reported.

On 08 January 2016, Israeli forces demolished a house belonging to Shafiq Mohammed Halabi in al-Basateen neighbourhood, northwest of Sarda village, north of Rmallah. It should be noted that the son of the aforementioned person named Mohanned (20) carried out a stabbing attack against settlers in the Old City in East Jerusalem on Saturday, 03 October 2015.

During the reporting period, Israeli forces conducted at least 72 military incursions into Palestinian communities in the West Bank and 6 ones in occupied East Jerusalem. During these incursions, Israeli forces abducted at least 64 Palestinian civilians, including eight children. Twelve of these civilians, including four children, were abducted in East Jerusalem.

During the reporting period, on 11 January 2016, Israeli forces raided Birzeit University, north of Ramallah. They detained the university security officers and then raided the offices of the student blocs and Student Council, from which they confiscated their contents.

In the context of house demolitions and demolition notices issued on grounds of non-licensing construction works, on Thursday, 07 January 2016, bulldozers of the Israeli municipality demolished an under-construction house in Silwan village, south of East Jerusalem, belonging to Nadia Abu Diab under the pretext of building without a licence. Abu Diab said to PCHR’s fieldworker that Israeli forces demolished her house without a prior notice.

On the same day evening, Israeli forces accompanied by municipality bulldozers raided the Mediterranean Restaurant near Beit Safafa village, west of occupied East Jerusalem. They demolished parts of the Restaurant that were attached by its owner to the main building three months ago.

On Sunday, 10 January 2016, the Israeli municipality officers delivered an administrative demolition order issued against an under-construction residential building in al-Thawri neighbourhood, south of the Old City in East Jerusalem, belonging to Mousa Mohammed al-Abasi under the pretext of non-licensing. Al-Abasi said that the municipality officers handed over to him a demolition order against a 2-storey building. The first floor is a garage that was built four years ago, while the 230-square-meter second floor consists of two apartments.

As part of the punitive measures taken against the city residents, on 10 January 2016, a number of Palestinian civilians residing in East Jerusalem were surprised to find their National Insurance allocations suspended for no legal justification. It should be noted the persons, whose National Insurance was suspended, were abducted by Israeli forces from al-Aqsa Mosque and then deported upon decisions issued by the Israeli police and intelligence service. Israeli forces classified these persons as members of the “Morabetoun and Morabetat” banned organization upon an order from Moshe Yaalon, the Israeli Defence Minister.

In the Gaza Strip, on 13 January 2016, Israeli forces moved about 100 meters to the east of al-Qararah village, east of Khan Yunis, south of the Gaza Strip. They levelled lands that were already levelled previously and withdrew later.

On 11 January, at approximately 22:30, Israeli gunboats stationed off the Equestrian Club, west of Beit Lahia in the northern Gaza Strip, heavily opened fire and fired shells in the vicinity of Palestinian fishing boats sailing within 3 nautical miles. The gunboats also chased and pumped water at the boats in an attempt to sink them. The shooting which continued for 30 minutes caused fear among fishermen who were forced to flee. Neither casualties nor damages were reported.

Israeli Settlement activities continued in the West Bank. A plant nursery, south of Nablus, was demolished, and “Mevo Dotan” settlement’s checkpoint, southwest of Jenin, was expanded.

On Wednesday, 13 January 2016, Israeli forces moved into al-Saweya village, south of Nablus. The Israeli bulldozers levelled 500 meters of a plant nursery and damaged the plants inside. The overall area of the plant nursery is a dunum[1] and a half.

Israeli troops continued the use of excessive force against peaceful demonstrations protesting settlement activities and the construction of the annexation wall on their land.

At approximately 13:00 on Friday, 08 January 2016, dozens of Palestinian young men headed to the border fence between the Gaza Strip and Israel, east of al-Shuja’iya neighbourhood, east of the Gaza Strip. A number of protesters approached the fence, set fire to rubber tires and threw stones at the Israeli forces stationed along the fence. Due to this, the Israeli forces sporadically fired live bullets and tear gas canisters at the protesters. As a result, five civilians were wounded. Two of them were hit with live bullets, while the three others were hit with rubber-coated metal bullets.

At approximately 14:00, Israeli forces stationed at Beit Hanoun (Erez) crossing, northwest of Beit Hanoun, north of the Gaza Strip, fired live bullets, rubber-coated metal bullets and tear gas canisters at dozens of young men, who were on the road between the Palestinian and Israeli sides of the crossing. The protesters threw stones at the soldiers in protest at the Israeli attacks against the Palestinian civilians in Jerusalem and the West Bank. As a result of the clashes which continued until 17:30, three civilians, including a child, were wounded. Two of them were hit with live bullets to the lower limbs, while the third one was hit with a rubber-coated metal bullet to the head.

Around the same time, dozens of Palestinian young men headed to the border fence between the Gaza Strip and Israel, east of al-Bureij refugee camp, in the centre of the Gaza Strip. The protesters threw stones at the soldiers stationed behind the sand barriers along the fence, due to which, the Israeli soldiers opened fire at them. As a result, two civilians, including a child, were wounded with live bullets. They were then taken to al-Aqsa Hospital in Deir al-Balah to receive medical treatment. Medical sources at the hospital classified the injury of the child as serious and identified the wounded as: Saif al-Deen Jihad al-Hour (16). He was hit with a live bullet to the lower back; and Jihad ‘Atia al-Qirnawi (22). He was hit with a live bullet to the left thigh.

At approximately 15:00, dozens of young men headed to the border fence between the Gaza Strip and Israel, east of al-Farahin area, east of Khan Younis, south of the Gaza Strip. A number of protesters approached the border fence, set fire to rubber tire, raised the Palestinian flags and threw stones at the soldiers stationed along the fence. Due to this, the Israeli soldiers sporadically fired live bullets and tear gas canisters at the protesters until the evening. As a result, Farid Shawqi Hussain Abu Ishaq (29), sustained minor wounds to the hand. He was then taken to the European Gaza Hospital to receive medical treatment.

Following the Friday prayer, on 08 January 2016, in spite of the bad weather, dozens of Palestinian civilians and Israeli and international human rights defenders organized a demonstration in protest at the Israeli settlement in Bil’in and Ni’lin villages, west of Ramallah. The Israeli forces used force to disperse the protesters by firing live bullets, rubber-coated metal bullets, tear gas canisters and sound bombs at the protesters and chased them into agricultural fields. As a result, many civilians suffered tear gas inhalation and others sustained bruises as Israeli soldiers beat them up.

At approximately 15:00 on Saturday, 09 January 2016, Palestinian civilians and Israeli and international human rights defenders organized a protest in the centre of Kufor Qaddoum village, northeast of Qalqilia, and made their way to the eastern entrance of the village in protest against closing that entrance since the beginning of al-Aqsa Intifada with an iron gate. When the protesters approached the entrance, Israeli forces fired live bullets at them. As a result, Maher Mahmoud Suliman (60) was hit with a live bullet to the thigh.

Due to the number and severity of Israeli human rights violations this week, the PCHR made several recommendations to the international community. Among these were a recommendation that the international community and the United Nations to use all available means to allow the Palestinian people to enjoy their right to self-determination, through the establishment of the Palestinian State, which was recognized by the UN General Assembly with a vast majority, using all international legal mechanisms, including sanctions to end the occupation of the State of Palestine.