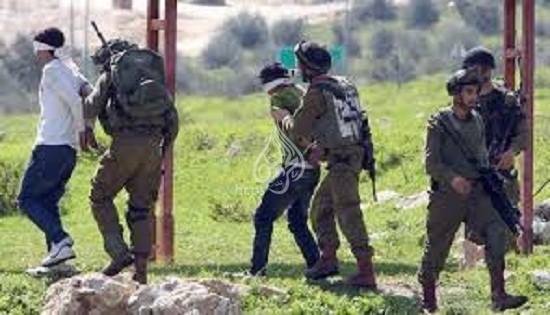 Israeli soldiers have kidnapped overnight, and on Monday morning, 32 Palestinians in various invasions and extensive military searches of homes in different parts of the occupied West Bank, and occupied Jerusalem, the Palestinian Prisoners Society (PPS) has reported.The PPS said dozens of soldiers invaded the Ramallah and al-Bireh District, in central West Bank, searched dozens of homes and kidnapped 14 Palestinians, after interrogating them and their families.

It added that 13 of the kidnapped Palestinians were taken prisoner in Silwad town.

The PPS added that the soldiers also invaded various Palestinian communities in the southern West Bank district of Hebron, stormed and searched many homes, and kidnapped eleven Palestinians.

In Nablus district, also in the northern part of the West Bank, the soldiers kidnapped Mahmoud Tabbouq, after storming and searching his home.

Another Palestinian, identified as Amjad Anan Hmeidan, 20, was kidnapped from his home in Salfit, in central West Bank.

In Bethlehem, the soldiers kidnapped Moath Mahmoud Sheikh, 23, from his home in Marah Rabah town.

In occupied Jerusalem, the soldiers searched homes and kidnapped a Palestinian child, identified as Issa Ferawi, 15, from the Old City.