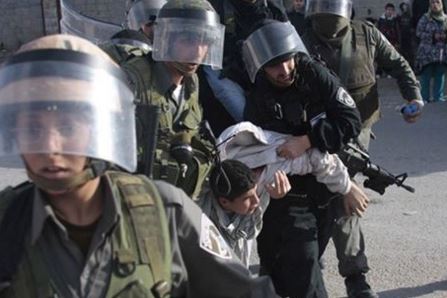 Israeli soldiers have kidnapped, on Wednesday at dawn, nineteen Palestinians, after invading and searching their homes, in different communities in the occupied West Bank, including Jerusalem.Media sources in Hebron, in the southern part of the West Bank, has reported that the soldiers invaded Sa’ir town, north of the city, and kidnapped Mahmoud Shehada al-Metwer, 16, and Majd Sultan Jabarin, 16.

The soldiers also invaded the homes of Mahmoud Shalalda, his brothers Mohammad and Ahmad, and violently searched them.

The soldiers also installed several roadblocks on main roads leading to Hebron city, the ath-Thaheriyya town and the al-Fawwar refugee camp, south of Hebron, and Ethna town, west of the city, before stopping and searching many cars, and investigated the ID cards of the passengers.

In the West Bank district of Bethlehem, the soldiers kidnapped a child, identified as Mohammad Thieb Shakarna, 15, from Nahhalin town west of Bethlehem, and Ahmad Radwan Hamamra, 23, from Beit Sahour, east of Bethlehem.

Israeli military sources said one soldier was shot and mildly injured, during the ‘arrest campaign in Tulkarem,’ and that shooter managed to escape while the soldiers initiated extensive searched in the area.