A Decade of Siege on Gaza 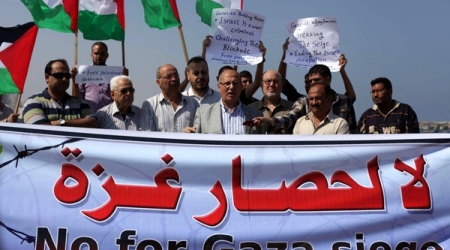 With a decade of Israeli-imposed economic siege on Gaza and three devastating wars which accompanied it, the Strip now suffers from an acute housing deficit, with a need of more than 70,000 housing units.Israeli occupation authorities have imposed a complete blockade on the Gaza Strip since the sweeping victory of the Hamas movement in the Palestinian Legislative Council, circa 2006. It tightened the siege in 2007, after Hamas met internal conflict with the Fateh movement.

Statistics reveal, according to Al Ray Palestinian Media Agency, the catastrophic impact of ten years of tightened siege and the complete closure of six Gaza crossings.

The Egyptian government has played a major role in tightening the grip around Gaza, especially after the ousting of president Mohammed Morsi, in 2013.

Israeli authorities closed the six crossings it has controled in Gaza since 2006, except for Kerem Shalom crossing, which opens for enterance of humanitarian goods into Gaza. Economic specialist Maher Attaba’ explained that the Gaza Strip needs the entry of more 900 trucks per day, while the Israeli side allows the entry of just 300 to 400 trucks per day, which does not meet the needs of Gaza’s population. He estimated that the allowed goods into Gaza satisfy only 30% of what is actually reuired.

Meanwhile, the Egyptian side has almost completely closed Rafah border crossing — the sole crossing with Gaza — banning entry of anything at all, even humanitarian essential needs. In 2015, it reopened the crossing for a mere 22 separated total days, and for humanitarian cases only.

Egyptian authorities have also destroyed the lifeline of underground tunnels between the Gaza Strip and the Sinai Peninsula. The people of Gaza resort to this method in order to bring needed goods to the besieged coastal enclave.

During the past ten years, Gaza has witnessed three devastating wars, in which more than 4.000 people were killed. After the last war, in 2014, the Strip remains unstable, as the people anticipate war with the outbreak of any spark of conflict.

More than 350 Palestinians died after being banned from travelling to receive medical treatment outside Gaza. The lives of thousands are still threatened under the blockade.

The 2014 aggression left ten thousand Gazans homeless after their homes were destroyed. One year has passed since the war, but the people cannot rebuild their demolished houses, as Israel is still banning the entry of cement and other building materials.

Ibrahim Redwan, the director of Palestinian Land Authority, explained that Gaza suffers from an acute housing shortage, estimating it at 70,000 housing units; the natural need of Gaza is 10,000 of housing units a year.

Israeli occupation forces destroyed 17.132 houses in 2014. 2,465 housing units were completely destroyed and 14,667 were partially destroyed. As many as 39,500 houses were affected, with the economic losses exceededing $3 billion.

The siege has naturally coincided with a sharp rise in unemployment rates. The rate of unemployment has now exceeded 60%, while the poverty line has reached 60% according to statistics of the National Center for Information.

The United Nations reported that 70% of Gaza’s population suffer from food insecurity, and are dependent on food aids.

Israeli authorities have also limited the allowed area for fishing to six miles, off Gaza shores. It attacks any boat which exceeds this limit.

Fishermen explain that an area of this size is not sufficient, since the fish are typically found after the six miles.

The Gaza Strip, the occupied West Bank and East Jerusalem are rich in oil, gas a shale oil resources, al-Haq claims in its 2015 report, Annexing Energy. If these resources were to be developed, Palestine would be economically self-sufficient and relieved from dependence on international aid.

However, Pierre Krähenbühl, Commissioner General for the United Nations Relief and Works Agency for Palestine Refugees in the Near East (UNRWA) says that the Gaza Strip is witnessing a catastrophic humanitarian condition.