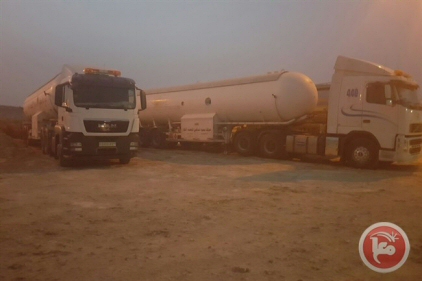 Israeli authorities allowed cooking gas and diesel into the besieged Gaza Strip on Friday, Palestinian sources told Ma’an News Agency.Samir Hamadeh, a board member of an organization of Gaza fuel and gas companies, said that around 120 tons of gas and 200,000 liters of diesel were allowed into the Gaza Strip, via Kerem Shalom crossing.

Israeli authorities exceptionally opened the crossing, on Friday, to allow the materials through.

The fuel was intended to supply the Gaza power station, which has suffered from chronic shortages due to the crippling Israeli blockade of the Palestinian enclave. The power station has not run at full capacity in years.

The Gaza Strip also suffers from shortage of gas — used daily by Palestinians in the strip for both cooking and heating — as the allowed quantities are not sufficient to residents needs.

Israel’s 50-day offensive on Gaza in 2014 has also taken its toll on the local infrastructure, as Gaza’s power plant was targeted and put out of commission.

In September, the United Nations warned that that the Gaza Strip could become uninhabitable for residents within just five years, pointing to the devastation of war and nearly a decade of Israel’s blockade.