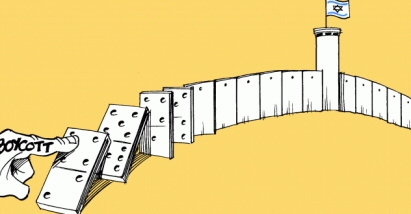 The Israel Today newspaper, on Thursday, said that Israel is setting plans to combat the BDS movement, as it gains ground.The plan is expected to contain monitoring tools to hinder BDS online activism, in addition to more advanced tools against any of its campaigns.

The BDS movement aims to Boycott, Divest and Sanction Israel for its war crimes against Palestinians. The campaign thrived after last summer’s Israeli offensive on Gaza, which killed over 2,200 Palestinians, most of them children and civilians.

Commenting on the plan to combat BDS, Secretary General of the Palestine National Movement, Dr. Mustafa Al-Barghouthi told the PNN that “this is nothing new coming from Israel.”

“Israel has set its plans long ago and spent millions of dollars to overcome BDS, but has failed,” Barghouthi said. “Instead, the movement is further escalating due to the continuous Israeli aggression, extra-judicial executions, and constantly expanding settlements which Israel refuses to freeze.”

Barghouthi added that this also indicates the amount of losses which have hit Israel, due to the campaign, as economists approximated the losses at $31 billion.

The Israeli plan comes after a number of international companies have cut ties with Israel, including the French giant telecommunications Orange, American Anthropological Association (AAA) , G4S, in addition to closing illegal West Bank factories such as Soda Stream, and current pressures on Airbnb to stop hawking property as ‘Israeli’, in the occupied West Bank.

Last August, Haaretz newspaper said that the Israeli military intelligence monitors all BDS groups and activity all over the world because it forms a great threat to the Israeli economy.

On 18 June 2015 The Israeli Justice Minister, Ayelet Shaked was “putting together a plan of action to for filing civil and criminal lawsuits against BDS activists for damaging Israeli trade, describing the movement as “discriminatory and racist.”

Shaked, last year, likened Palestinians to ‘snakes’, in a post later removed from her Facebook page but widely reported on by the Israeli media, and said that all Palestinians, including mothers, should be killed.