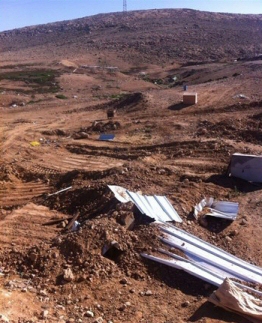 Like the housing in the unrecognized village, the mosque was built with corrugated metal. Israeli forces initially destroyed the mosque on January 6, but residents rebuilt the structure, which was then torn down again.

Ma’an News Agency reported that, following the first demolition, Palestinian member of the Israeli Knesset, Abu Arar, said he attempted to prevent the demolition, but had been unable to convince the Israeli authorities. ‘(They) do not spare any effort in exerting pressure on the Arab population of the Negev in their attempt to empty the land of Arabs and to displace them,’ he said.

The Palestinian MK slammed Israel for not providing ‘any services to Palestinians in unrecognized villages.’ Despite collecting taxes from Palestinians, he said that ‘Israeli authorities demolish their homes and close the doors of livelihoods in their faces.’

According to the order, the 85 residents that will be affected by the demolition have until next Monday to evacuate their homes.

A spokesperson for the Coordination of Government Activities in the Territories (COGAT) said the orders were given ‘against 12 illegal buildings.’

The spokesperson added that ‘the owners of the constructions were summoned to the subcommittee of supervision as an opportunity to set up the legal regulation of the buildings.’

Ghassan Daghlas, who monitors settlement activity in the northern occupied West Bank, confirmed the demolition order and said that “the Israeli authorities are committing a humanitarian massacre against Palestinians in the area, especially as they have been in the area for dozens of years.”

Daghlas call on all appropriate human rights and humanitarian organizations to pressure the Israeli government to stop the demolition order, which he described as ‘inhumane’, and said directly supports Israeli settlement in the area.