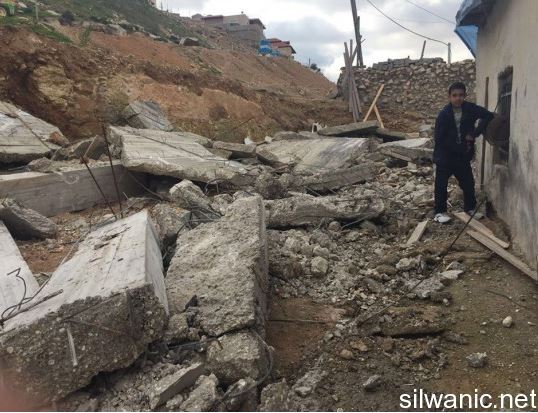 Israeli soldiers invaded, on Tuesday morning, Wad Qaddoum neighborhood, in occupied Jerusalem, and demolished an under-construction home. The army also demolished residential sheds and tents near Hebron.The Wadi Hilweh Information Center in Silwan (Silwanic) has reported that the soldiers demolished the home of Yahya Mohsen, after surrounding it.

The demolished property was 200 square meters; its owner started constructing it seven months ago.

Mohsen said he was planning to move into his new property, along with his eight family members, and that he was building it because his current residence is too small.

The family is still paying high fines to the City Council for what Israel labels as ‘construction violations.’

In related news, Israeli soldiers demolished and removed several tents and residential sheds in the Bedouin villages of al-Halawa and Jinba, in Masafer Yatta area, south of the southern West Bank city of Hebron.

Coordinator of the Popular Committee against the Wall and Settlements in southern Hebron Rateb Jabour, said several Israeli military vehicles invaded the two villages, demolished four residential sheds and tents, and confiscated solar cells that were sponsored by the European Union, to provide the residents with electricity.

The demolished properties were inhabited by more than 20 members of Abu Arram family, including children and elders.

The also soldiers attacked family members, and sprayed them with pepper-spray, causing many injuries. Palestinian Injured After Being Rammed By A Colonists’ Car Near Qalqilia