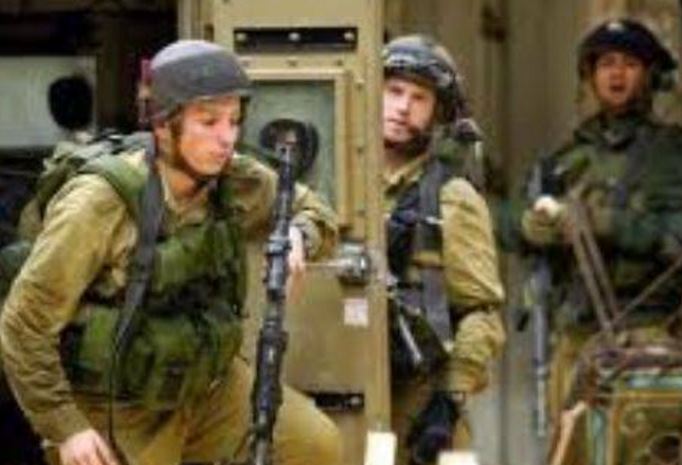 Israeli soldiers kidnapped, on Tuesday at dawn, twenty-three Palestinians in different parts of the occupied West Bank, including one Palestinian, after the army shot and injured him, in Qabalan village, south of Nablus. One Palestinian was injured after Israeli colonists attacked him in Hebron.Ghassan Daghlas, head of the Israeli Settlements File in the Palestinian Authority in the northern part of the West Bank, said at least six undercover Israeli soldiers invaded a Cellphone Shop in Qabalan village, south of Nablus, and kidnapped Samer Al-Aqra’, and his brother Abdul-Latif, shot an injured another Palestinian, identified as Yousef Sharhrouj, and kidnaped him; he was shot in his leg.

Daghlas added that the soldiers confiscated a computer and an iPad, from the invaded shop, and took all kidnapped residents to the military base in Ariel colony. The army also invaded the students’ dorms in the Najah University, west of Nablus, and searched them.

In addition, the soldiers kidnapped Saher Nasasra from Beit Forik village, near Nablus, and Soheib al-Ashqar from Saida village, in the northern West Bank district of Tulkarem.

In the Jenin district, also in the northern part of the West Bank, the soldiers installed a military roadblock at the main entrance of Ta’nak village, and kidnapped a Palestinian, identified as Abdullah Abu Qatheela.

In Bethlehem, the soldiers searched many homes in the al-Khader town, south of the city, and kidnapped Mansour Nasri Salah, 18, Bilal Mohammad Salah, 15, Khalil Khaled Salah, 17, and Mansour Ateyya.

In Hebron, in the southern part of the West Bank, the soldiers kidnapped Karam Fakhri Miswada, 34, his brother Shawqi, 30, and Ibrahim Abdul-Wahab al-Atrash.

The army invaded various neighborhoods in the city, and broke into the home of Ibrahim Samir Eskafi, 23, who was killed by Israeli army fire on November 4, 2015, and took measurements of the building in preparation for demolishing it. Eskafi was killed after the army alleged he “deliberately rammed Israeli soldiers with his car.”

The soldiers also installed several roadblocks, especially near Halhoul and ath-Thaheriyya towns, and Hebron’s northern entrance, stopped and searched dozens of cars, and investigate the ID cards of the passengers.

In related news, a Palestinian was injured, after a number of extremist Israeli colonizers assaulted him, close to the Keryat Arba’ colony, in the eastern part of Hebron city.

Medical sources in the Hebron governmental hospital said Mohammad Rasmi al-Haddad, 21, suffered a moderate injury after the Israeli assailants beat him on various parts of his body.