Gazans Suffer, and the World Looks Away 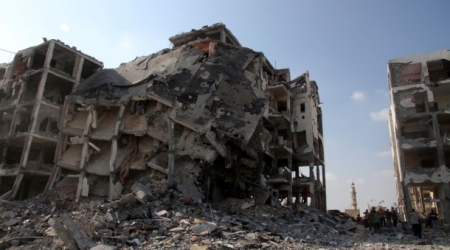 After nearly 10 years of a sustained and unlawful Israeli blockade imposed on Gaza, it is scandalous that the world takes such little notice of this people so long beleaguered.There have been many pious references in UN debates relating to Libya and Syria about a UN ‘responsibility to protect’ but not a word about applying the norm to the people of Gaza whose urgent needs have for years been overlooked as they languish on a precipice of desperation.

We should recall that it was the UN that took responsibility for Palestine in the period after World War One, by certifying the British grant of Jewish homeland, and then after World War Two, by proposing a partition of the land between Jews and Palestinians, without taking account of the wishes of the indigenous population.

These are the facts in Gaza:

An unemployment of 43 percent (60 percent among youth).
A decline of 24 percent of gross domestic product; the real GDP per capita is estimated to be between 32 percent and 72 percent less in 2015 than it was in 1994.
Poverty levels at 39 percent; food insecurity at 47 percent.
At least 90 percent of water is unsafe to drink.
Gender-based violence affects 73 percent of Palestinian households.
More than half of Gazans suffer from chronic depression and more than half of children need professional supportive therapy.

These statistics tell only a small part of the story and fail to capture the full reality of the Gazan ordeal.
To be in the overcrowded, impoverished Gaza Strip is to live in the world’s largest open-air prison. More than half of the 1.8 million people are confined to refugee camps and the majority have no means of leaving even for emergency medical treatment.

If this were not bad enough, the daily security conditions are traumatising for residents and even for occasional visitors or UN aid workers. With drones flying overhead, frequent sonic booms from Israeli overflights, targeted assassinations occurring from time to time, fishing vessels subject to violent harassment by Israeli patrol boats and innumerable retaliatory missile strikes, the life of ordinary Gazans has long been a living hell.

Even this assessment is made without taking account of the three unprecedented massive attacks launched during the past seven years by Israeli air, land, and sea forces against a vulnerable and occupied people with no place to obtain shelter or hide.

In 2008-09, 2012, and 2014, these attacks caused widespread death and destruction, including major damage to residential areas and to infrastructure. Such devastation was accentuated by Israel’s refusal to allow building materials to enter Gaza, leaving thousands homeless to this day or living in makeshift shelters, and the electric grid, water purification and sewage systems in shambles.

The one-sidedness of the civilian casualties conveys that the reality was more of a massacre than a war, or perhaps more accurately described as state terrorism. Also indicative of Gaza’s situation is the denial of a refugee option allowing civilians to escape from the combat zone even temporarily during the onset of attacks.

Israel tells the world that its Gaza policy is a necessary and reasonable component of dealing with a terrorist political actor in Hamas and protecting its population from rocket fire.

Israel rejects international criticism of the attacks, insisting that it is not aiming to destroy Hamas, but to administer enough pain that it will remain subdued.

As explained in the Jerusalem Post by Efraim Inbar, an Israeli professor of strategic studies at Bar-Ilan University: “Western thinking is solution-oriented, while Israel is engaged in a protracted conflict with Hamas. The Israeli government wisely has defined limited political and military goals for this offensive, in accordance with what we call ‘mowing the lawn’.”

Such chilling language has become habitual. Other top government advisers and leaders justify Israel’s Gaza policy in terms other than security.

For instance, Dov Weisglass, a prominent associate of Ariel Sharon, referred to the 2005

‘disengagement’ plan as ‘formaldehyde’ effective in freezing the peace process, and above all preventing pressure to agree to the existence of a Palestinian state.

Although Israeli leaders please Washington by giving lip service to the idea of a Palestinian state, their real position is to preclude it from happening. For this reason, Gaza policy anticipates a condition of semi-permanent oppressive occupation reinforced by periodic massacres and continued captivity.

This bloody interaction was far from inevitable. My own experience of several meetings with prominent Hamas leaders in recent years was consistent in their advocacy of a long-term ceasefire, up to 50 years.
Sandy Tolan, author of The Lemon Tree and a respected journalist, determined that “Israel and the United States had repeated opportunities for a diplomatic solution in Gaza. Each time, they have chosen war, with devastating consequences for the families of Gaza”.

Tolan quotes from a letter given by the Hamas leader in Gaza, Ismail Haniyeh, to Jerome Segal of the NGO Jewish Peace Lobby in 2006, shortly after Hamas won the legislative election in Gaza, to be delivered to then-US president George W Bush.

“We are so concerned about stability and security in the area that we don’t mind a Palestinian state in the 1967 borders and offering a truce of many years.” Haniya added some words that have turned out to be prophetic: “The continuation of this situation will encourage violence and chaos in the whole region.”

Bush and Israeli leaders refused to respond to such initiatives despite the fact that earlier short-term ceasefires had brought violence between Gaza and Israel to a virtual halt.

In other words, mowing the lawn was preferred by Israel and the US to an approach that might have normalised the situation in ways that would almost certainly have enhanced Israeli security and regional stability.

What should be done

It is worth appreciating Gaza’s importance. This is not always self-evident as even the Palestinian Authority marginalises Gaza, given its stress on the occupied West Bank, but Israel exhibits an awareness, explaining why it persists in keeping the population of Gaza at intolerable levels of stress.

As the French historian Jean-Pierre Filiu makes clear in his authoritative 2014 study, Gaza: A History, Gaza has been the inspirational foundation of Palestinian resistance ever since the 1950s, including being the place where the transformative intifada burst forth in 1987.

Few realise that Gaza has a rich history stretching back more than 1,000 years. It was a major trading centre and port, as well as being a place where close and renowned followers of the Prophet lived and worshipped.

With the rise of the Islamic State, the persistence of wars in Syria and Yemen, chaos in Libya, authoritarian crackdowns in Turkey, Saudi Arabia and Egypt, a renewed rivalry of the West with Russia and sectarian and proxy wars, it is not surprising that Israel enjoys a free pass from the international community.

The US has turned its back on the Israel-Palestine struggle, instead devoting itself to finding a diplomatic solution to Iran’s nuclear programme.

It is no wonder in such a regional setting that the torments confronting the people of Gaza are essentially ignored, at least until the next wave of Israeli violence again captures headlines with yet another slaughter.

Despite the distractions it is unacceptable to allow Gaza to remain an open wound.

It is time to encourage governments to impose sanctions upon Israel until the blockade is lifted. Three steps seem imperative as demands made in the name of minimal justice and respect for international law:

(1) A Palestinian seaport in Gaza open to international shipping, which is UN monitored to prevent weapons smuggling;

(2) An immediate end of the blockade and other forms of collective punishment in accord with Article 33 of the 4th Geneva Convention;

(3) A mutual ceasefire coinciding with the end of the blockade, which if not implemented within three months should result in the establishment of a protection mechanism under international auspices.

Richard Falk is an American professor emeritus of international law at Princeton University. In 2008, the UN Human Rights Council appointed Falk to a six-year term as a United Nations Special Rapporteur on “the situation of human rights in the Palestinian territories occupied since 1967. https://richardfalk.wordpress.com/