Palestinian Legislator Among Many Injured in Jenin 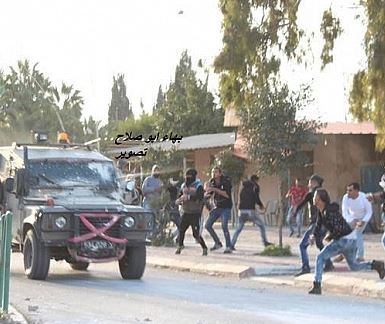 Israeli soldiers resorted, Saturday, to the excessive use of force against dozens of Palestinians, protesting the ongoing Israeli onslaught and siege, targeting Qabatia town, in the northern West Bank district of Jenin. The soldiers shot and injured a legislator, and many other Palestinians.Hundreds of Palestinians participated in the procession, driving dozens of cars from Jenin city and Jenin refugee camp, and headed towards the besieged Qabatia town.

The Palestinians were trying to enter Qabatia through the Shuhada Triangle junction, north of the town, when the soldiers assaulted them.

Qabatia has been the target of a massive Israeli military invasion following Wednesday’s shooting attack in Jerusalem, that led to the death of an Israeli policewoman, identified as Hadar Cohen, 19, and three Palestinians who carried the attack out.

Families Remain Isolated In A Surrounded Building in Qabatia