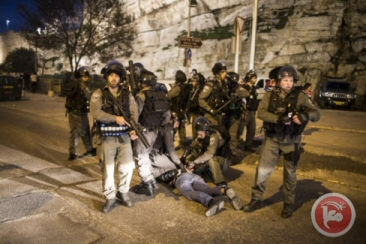 Israeli forces abducted at least 22 Palestinians on Monday, during overnight raids in the occupied West Bank and East Jerusalem, according to reports by Israeli and Palestinian sources.Local sources told Ma’an News Agency that at least four Palestinian minors from East Jerusalem were detained by Israeli security forces. They were identified as Mahdi Abu Assab, 13, Abdullah Jolani, 15, Muhammad Salaymah, 15, and Omar Muna, 17.

An Israeli army spokesperson said that they had detained 18 people overnight, including three people in Tulkarem, and three in Huwwara south of Nablus.

Local sources identified one of the Tulkarem detainees as Wael Khalil Hali, and two of those detainees from Huwwara as Izz al-Din Shehadeh and Muhammad Odeh.

The Israeli army also said it had detained two Palestinians in Qabatia south of Jenin — identified as Muhammad Kamil and Muhammad Abu al-Rub — and one near al-Jalama, to the north of Jenin.

Qabatia has been the site of serious tensions over the past week, after Israeli security forces implemented a three-day blockade of the village.

Palestinian Prime Minister Rami Hamdallah denounced the siege as “collective punishment”, after three youths from Qabatia killed an Israeli border police officer in Jerusalem. The blockade has since been lifted, but Israeli authorities have since revoked the work permits of a number of Qabatia residents.

The army spokesperson also said that six people had been detained in the Bethlehem area, notably citing two detentions in the Aida refugee camp, to the north of Bethlehem — identified as Jamil Malash and Muhammad al-Dibs — and one south of Bethlehem.

Another three people were taken from the village of al-Khader, west of Bethlehem, and identified as Mujahid Dadu and Rami Abu Hammad.

One person was abducted in the village of Surif, to the north of Hebron, and another, Hatem Ahmad Sweti, in Beit Awwa west of Hebron.

Meanwhile, the spokesperson said that two “Hamas operatives” were detained from the Qalandia refugee camp and south of Qalqilia.

Sources identified the two men as Atef Mteer from Qalandiya and Zuhdi Abdullah from the village of Deir Ballut.

According to Palestinian prisoners’ rights organization Addameer, 6,800 Palestinians were detained by Israel as of December, at least 660 of them in administrative detention.

‘Detainees’, in such cases, are frequently taken to unknown locations for interrogation, where they are subjected to inhumane treatment and, often, torture.