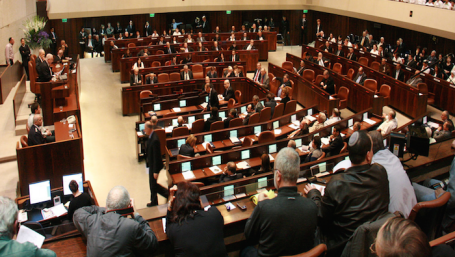 On Febuary 8th, the Knesset Ethics Committee suspended three Joint List Members of Knesset (MK) from the Knesset.Palestinian MKs Hanin Zoabi and Basel Ghattas were suspended from their duties for four months; Jamal Zahalka was suspended from his for two months.

The three lawmakers will only be able to vote in the plenum and in committees.

The committee ruled to suspend the MKs for visiting ten Palestinian families in Jerusalem that could not bury relatives killed by Israeli police because Israeli authorities withheld the bodies.

But, Prime Minister Benjamin Netanyahu, the Knesset Ethics Committee, and MKs from every political party except the Joint List, claim the visit was objectionable because some of the families were grieving relatives killed by Israeli police in suspected attacks against Israelis.

The Knesset Ethics Committee took up the case against the three Joint List MKs after Netanyahu and Knesset Speaker Yuli-Yoel Edelstein filed personal complaints against the lawmakers with the commitee.

Following the committee’s ruling to suspend the three MKs, the Joint List said it rejected the Ethics Committee’s decision “through and through.” The statement added that the three MKs have “paid a political price for a moral and humane stance.”

Zoabi characterized the committee’s decision as “the fruit of Netanyahu’s incitement.” “There is a politicization of the [Ethics] Committee,” she explained.

On Monday, Coalition party leaders sent a bill to the Knesset’s Law and Justice Committee, which, if approved, would set up a process to suspend MKs “not worthy of serious because of behavior that does not suit his status as an MK.”

Attorney General Avichai Mandelbit also has yet to decide whether he will take up the Knesset House Committee’s recommendation to open a criminal investigation against the Joint List MKs for their visit with the families.

Though the Joint List is coming under insurmountable pressure to give up the cause of Palestinian families unable to bury deceased relatives due to discriminatory policies of the state, their statement insists “even after the suspension we still demand the bodies held by the [Israeli] police be released immediately.’

The Joint List emphasized that returning bodies to families for proper burial is a religious duty and “perfectly legitimate regardless of the circumstances of death.”