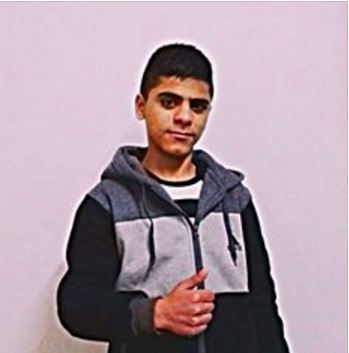 Israeli soldier killed, on Wednesday, a Palestinian child in the al-‘Arroub refugee camp, north of the southern West Bank city of Hebron, after several military vehicles invaded it.Dr. Sharif at-Tarda, head of the Emergency Unit at the al-Mezan Hospital in Hebron, said the child was shot in the chest, and that the bullet penetrated his heart and exited from the left side.

Surgeons and specialists attempted to save his life, but he died of his serious wounds, at-Tarda added. The slain child has been identified as Omar Yousef Madhi Jawabra, 15.

Eyewitnesses said the soldiers clashed with dozens of local youths, after the army invaded the refugee camp, and fired many rounds of live ammunition, rubber-coated steel bullets and gas bombs, including at a number of homes.

They added that a soldier pointed his gun at the child, and shot him in the chest.

Many Palestinians suffered the effects of tear gas inhalation, and received the needed medical treatment.