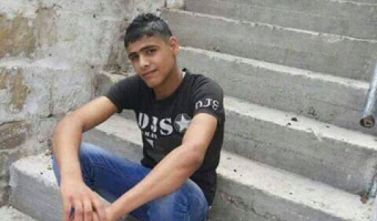 According to Defense for Children International-Palestine (DCIP), Israeli soldiers took Ahmad Q., 17, from his home and compelled him, at gunpoint, to act as a human shield during clashes in the West Bank city of Nablus, on January 12.DCIP reports that, at around 3:30 a.m., Palestinian youth threw stones at Israeli forces after they arrested Ahmad from his family’s house in the old city of Nablus. The soldiers commanded Ahmad to stand on the street and talk to the youths throwing stones while the soldiers sought shelter in an abandoned building nearby. Soldiers then forced Ahmad to walk before them as a human shield until they reached their military vehicles, according to Ahmad’s sworn testimony.

“International law is very explicit on the use of children as human shields,’ said Ayed Abu Eqtaish, Accountability Program director at DCIP. ‘There are no acceptable circumstances in which armed forces can lawfully use a child to shield themselves during clashes.”

Ahmad marched in front of the Israeli soldiers for nearly 70 meters (230 feet) while he was handcuffed, according to his brother, who witnessed the incident. “One soldier grabbed me by my neck and forced me to keep walking up to the main street while threatening to shoot me if I ran away,” Ahmad told DCIP. After reaching the military vehicles, one soldier hit Ahmad’s forehead with the stock of his rifle and, then, blindfolded and placed Ahmad on the metal floor of the vehicle.

Israeli forces transferred Ahmad to the nearby Huwara interrogation and detention center and, later, to an Israeli police station in the Jewish-only settlement of Ariel. Ahmad was interrogated, without the presence of a lawyer or family member, and accused of throwing stones, which he denied. He signed a document in Hebrew, without understanding its contents.

Ahmad is currently being held in Megiddo prison, inside Israel, and will appear before an Israeli military court on February 11.

The use of civilians as human shields, wherein civilians are forced to directly assist military operations or used to shield military troops or objects from attack, is prohibited under international law. The practice is also prohibited under Israeli law, based on a 2005 ruling by the Israeli High Court of Justice.

In 2014, DCIP confirmed two other cases of Israeli forces using children as human shields. On July 21, 2014, Israeli forces stopped a car carrying two children, 3 and 2, at the main entrance to Azzun, six kilometers (3.7 miles) east of Qalqiliya. One of the soldiers placed his rifle on top of the car near the back door where the children were sitting, and started firing teargas at nearby protesters so that they would not throw stones back, according to the children’s father.

During the Israeli military offensive on Gaza Strip in the summer of 2014, Israeli soldiers repeatedly used Ahmad Abu Raida, 17, as a human shield from July 23 to July 27, while he was detained during Israel’s ground invasion.

Since April 2004, DCIP has documented at least 25 cases involving Palestinian children being used as human shields by the Israeli army. All except one case have occurred after the Israeli High Court of Justice ruling. Only one of those cases led to the conviction of two soldiers, for “inappropriate behavior” and “overstepping authority.” Both were demoted in rank and given three-month suspended sentences.