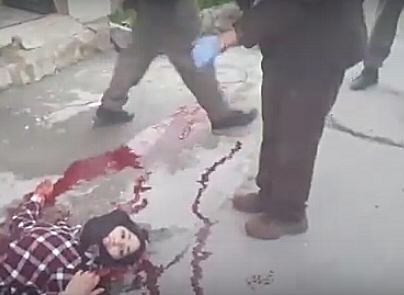 Israeli forces, on Sunday, shot and injured a 14-year-old Palestinian girl near Hebron city’s Ibrahimi Mosque, after an alleged attempted stabbing attack in the southern occupied West Bank, Israeli police said.Local Palestinian sources provided a conflicting report, and told Ma’an News Agency that the girl was with her sister, and neither had attempted an attack when the girl, identified as Yasmin Rashad al-Zarou, was shot.

Locals said the two girls had crossed an Israeli military checkpoint known as 160, after which the girls walked a few meters past the checkpoint, when Israeli soldiers fired at the 14-year-old who was walking away from the soldiers, critically injuring her.

Israeli media reported that no Israelis were injured during the incident.

She was evacuated from the scene by Israeli forces.

Minutes after the attack, a graphic video of the injured girl surfaced on social media. WARNING: Graphic content…