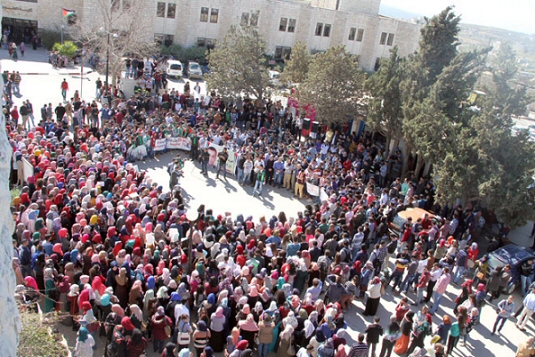 The Detainees and ex-Detainees Committee announced, Friday, that Israeli security is still refusing to allow hunger striking journalist Mohammad al-Qeeq’s family the right to visit with him.The committee said that the decision violates the latest Israeli Supreme Court ruling which permitted his family to visit him in Affula Hospiutal.

The family has been trying to see him, as his health condition has been rapidly deteriorating over the past couple of days. Mohammad has been staging his strike for a total of 86 days, now.

After suffering severe convulsions on Wednesday night, al-Qeeq lost the ability to breath, hear, see or speak until the morning.

The committee contacted the Civil Affairs Department at the Civil Administration Office, but, so far, the answer is still ‘No.’

According to WAFA Palestinian News and Info Agency, al-Qeeq’s family said, Thursday, that they wouldnãt object to transferring him to a hospital in Jerusalem, as long it is a Palestinian hospital, because they do not trust Israeli hospitals.

This announcement came after the family insisted al-Qeeq will not agree to any offer that doesnãt guarantee transferring him to a hospital in Ramallah, in order to be close to his family.

Shalash said that her husband continues to suffer from spasms of acute chest pain twice or more a day, adding that doctors have warned that he could die of a heart attack as a result of his ongoing hunger strike.

She confirmed that al-Qeeq is currently undergoing medical examinations in Israeli hospitals.

She noted that al-Qeeq continued to suffer from crushing pain in the chest and left hand, spasms in his legs and speaking difficulty.

In related news, Birzeit Universityãs administration, the Workers Union and a number of students organized a sit-in at the university campus in Birzeit town, north of Ramallah, on Thursday, in solidarity with the hunger-striking journalist.

The protestors called for immediate and unconditional release for al-Qeeq, a former Birzeit University student and head of studentsã council.

They demanded all academic institutions and international organizations to work together to implement campaigns of boycott and sanctions against Israel and its illegal measures against Palestinians.

President of the university, Abdul-Latif Abu Hijleh, said during the sit-in: ãPalestinian journalists have always been on the frontline, and al-Qeeq is now experiencing forceful and abusive measures from the Israeli occupation, because he practiced his normal right of speech and freedom of expression.ã

On behalf of the Workers Union, Salem Thawaba demanded that officials should urgently interfere to end al-Qeeqãs torture. He stressed on the importance of unity and reconciliation for al-Qeeq whose health has deteriorated to the point of facing imminent death.

According to Samer Samaro, Chairman of the Detainees and Ex-Detainees Committee in Nablus, a total of 650 Palestinians and 16 journalists are held in Israeli administrative detention.

Four Palestinian administrative detainees in Israeli jails are currently hunger striking in protest of being detained without a charge or trial, according to the Palestinian Prisoners Society (PPS), a prisoner support group.

PPS said that, beside the case of al-Qeeq, two other detainees, Mohammad al-Muhur from Jenin and Rabee Jibril from Bethlehem, have been on hunger strike for 64 days and eight days respectively, also in protest of being detained based on secret information, without a charge or trial.

A fourth detainee, Samer al-Issawi from Jerusalem, himself a former hunger striking icon, has also been on hunger strike for five days in solidarity with al-Qeeq, PPS added.

Administrative detention is a controversial and archaic Israeli practice, dating back to the days of British Mandate, that allows the detention of Palestinians without charge or trial, and for up to six-month intervals that can be renewed indefinitely.

Multiple human rights groups have accused Israel of using administrative detention as a form of collective punishment against Palestinians, and that Israeli authorities use this kind of detention when they fail to obtain confessions in interrogations of Palestinian detainees.

Last month, the European Unionãs mission in Jerusalem and Ramallah expressed their longstanding concern about Israel’s extensive use of administrative detention.

ãBeyond the well-known cases of Etraf Rimawi of the Palestinian Bisan Center for Research and Development, and Mohammad Abu Sakha, a trainer at the Palestinian Circus School, there are over 500 Palestinians, amongst them at least 4 minors, who are currently being held in administrative detentionã, the mission said.

The mission added it was especially concerned about the deteriorating health condition of Mohammad Al-Qeeq, held in administrative detention in Israel for more than three months now, and on hunger strike since November 25, 2015.

ãThe EU calls for the full respect of international human rights obligations towards all prisoners. Detainees have the right to be informed about the charges underlying any detention, must be granted access to legal assistance, and be subject to a fair trial.ã