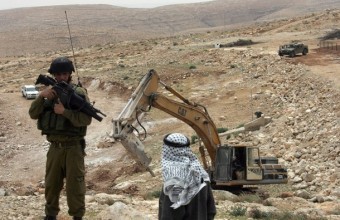 Israeli forces, on Thursday, demolished a home in the Bedouin village of Wadi al-Niam in the Negev, locals said.Village resident Rafat abu Ayesh told Ma’an that the forces, along with Israeli excavators, closed the area surrounding the village before tearing down the home.

Residents added that Israeli excavators, two days prior, had destroyed agricultural crops belonging to the al-Farawna family, in the Bedouin village of Shaqib al-Salam, also located in the Negev.

Shaqib al-Salam is one of a number of towns created by the Israeli government in the Negev, in an effort to to permanently settle nomadic Bedouin communities that lived across the Negev prior to the establishment of Israel.

Wadi al-Niam, where Thursday’s demolition was carried out, is one of at least 35 Bedouin communities never recognized by Israel and, as a result, denied basic services and rights, despite being citizens of Israel.

Tens of thousands of Bedouins living in the Negev face ongoing displacement.

While a plan to forcibly resettle the Bedouin population — the Prawer Plan — was shelved in 2014, Israel’s Habayit Hayehudi party joined Israeli Prime Minister Benjamin Netanyhau’s coalition, on the condition the plan was reinstated.

Israeli authorities, last summer, began plans to build a Jewish-only town on the land of the Negev village of Umm al-Hiran, in what Knesset member Taleb Abu Arar described as a racist move by the state.

While Bedouin villages are often targeted for demolition by Israeli authorities, demolitions have been largely focused on the occupied West Bank, since the beginning of 2016.

On Thursday, Coordinator for Humanitarian and UN Development Activities for the occupied ‪‎Palestinian territory Robert Piper called on Israel to halt all demolition orders in the occupied West Bank.

“The number of demolitions for just the first six weeks of 2016 is greatly alarming,” Piper said. “Over 400 Palestinians have been displaced from their homes – equivalent to over half the total number of Palestinians displaced in all of 2015.”