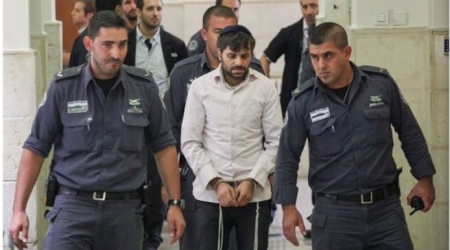 A fresh psych exam has found that Yosef Haim Ben-David, the main suspect in the murder of Palestinian teenager Mohammad Abu Khdeir, is responsible for his actions and fit to stand trial, Israeli Channel 2 reported on Monday evening.A Jerusalem District, who Court-appointed psychiatrist has determined Ben-David, 30, was not credible and was only pretending to be insane, according to Al Ray.

The psychiatric opinion was completed on Thursday, almost three months after the Jerusalem District Court ruled that Ben-David had committed murder, but did not convict him because of a previous psychiatric opinion presented by his attorneys, which questioned his sanity.

In November, after the judges determined that Ben-David was guilty of the crime, Hussein Abu Khdeir, the victim’s father, said it did not make sense that ‘this criminal waited a year and a half before presenting an opinion that he’s insane. Where was that a year ago? I am afraid the court acquits him.
Earlier this month, the two minors, who were involved in the murder, were convicted and sentenced ;one, 18 years old, to life in prison and another, 17, believed to have had a lesser role in the crime, to 21 years imprisonment.