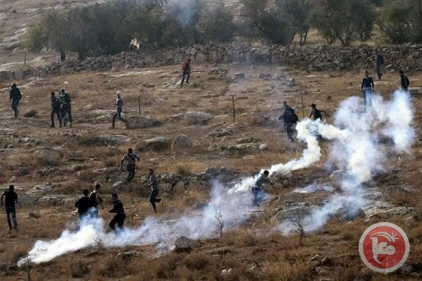 Ebayya said that the settlers were escorted by military vehicles and soldiers, and that a military checkpoint was set up at the entrance of the village.

Clashes erupted between dozens of Palestinian youths and Israeli forces.

Israeli forces fired live bullets, rubber-coated steel bullets and tear gas at youths and several farmers who were in their fields nearby.

An Israeli army spokesperson told Ma’an News Agency that they were looking into the report.

Three quarters of Yasuf’s lands are located in Area C — under full Israeli military and administrative control. According to a report by the Applied Research Institute-Jerusalem (ARIJ), over the years, some 602 dunams (148.7 acres) of Yasuf land have been seized to establish settlement housing.

Several Israeli settlements are located near Yasuf, including Ariel, the fourth largest settlement in the West Bank. These settlements in the occupied West Bank and East Jerusalem are illegal under international law.