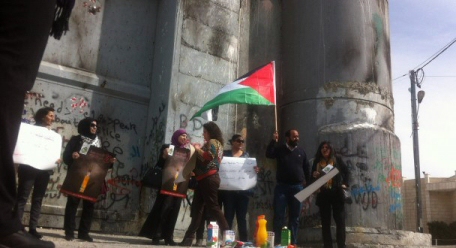 On the occasion of Israeli Apartheid Week, the Popular Struggle Coordination Committee (PSCC), on Wednesday, held a standing demonstration calling for the boycott of Israeli products, near the Israeli separation wall to the north of Bethlehem, also called the Apartheid Wall.The demonstration took place under the military tower situated in the wall, which is filled with anti-occupation, BDS slogans, and Banksy graffiti.

Head of PSCC, Munther Amira, said that Palestinian youth will continue their struggle against the occupation, whether through BDS or any form of popular resistance, and will continue despite Israeli aggression that includes intensified killings, executions, demolitions and kidnappings in order to thwart the resistance.

Member of the movement, Rawan Abu-Laban, said that women can make a difference with the boycott issue, since they are the chief decision makers on what to buy for their home; therefore, women can be the most influential leaders to boycott Israeli goods and support local products.

Ahlam Al-Wahsh, also member of the group, said that the movement aims to create awareness about the necessity of boycotting Israeli products, not only between women, but for all sectors of the community, including school students and younger generations, to have a culture of boycott among the youth, who make up the biggest proportion of Palestinian citizens.

Israeli Apartheid Week (IAW) is an annual international series of events held in cities and campuses across the globe. The aim of IAW is to educate people about the nature of Israel as an apartheid state and to build Boycott, Divestment, and Sanctions (BDS) campaigns as part of a growing global BDS movement. 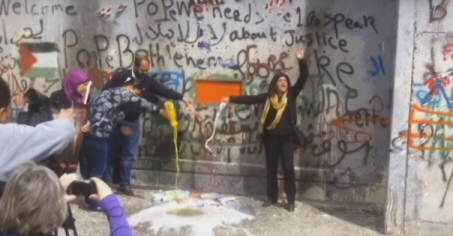