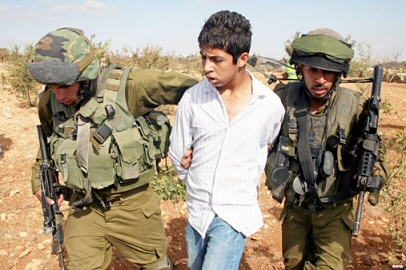 Hollywood stars have been urged to visit Palestinian children being held in Israeli jails. According to Middle East Monitor/Al Ray, the human rights organisation Avaaz made the call after Israeli authorities invited 26 Oscar notables to take part in free VIP trips in an attempt to improve the country’s image.

New York-based Avaaz called on the Oscar-winning artists, announced yesterday, to “visit imprisoned Palestinian children… and get that story all over the world’s media.’ It said the Israeli government wants “to hide the ugly face of the occupation behind photos of Hollywood stars on Tel Aviv beaches. The stars will be given an all-expenses paid journey so that they can paint a rosy picture of Israel – and Palestinians will be hidden from sight.”

‘We can show the world what happens to Palestine’s future stars, the children, who have their dreams shattered by Israel’s imprisonment policies. It’s impossible to see a child in prison and think they deserve their long sentence, or meet their family and remain indifferent.’

According to the organisation, more than 500 Palestinian children are imprisoned by Israel right now and many of them endure terrible abuse like beatings and harassment.