Crimes Against the Palestinians are Finally Called ‘Crimes’ 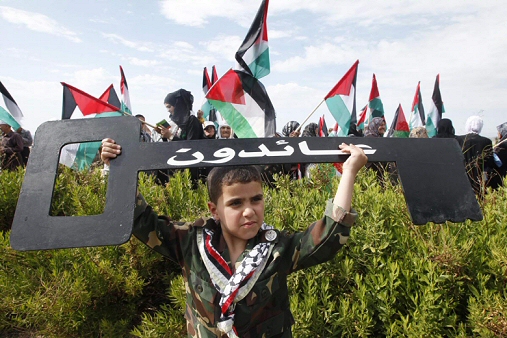 Unlike the political elite and Zionist activists, the Western public had not known or cared much about the Zionist project in Palestine before the establishment of Israel. Only after the birth of Israel, devout Christians and many Zionist Jews and secular intellectuals activated the call for sympathy, with the European Jews, to have a secured national home — not in Europe where they had been ill-treated — but in distant Palestine, and ignored the immorality and injustice of colonizing it. They knew that Palestine was populated by a community which had nothing to do with the Jews’ suffering in Europe, but perpetuated the Zionists big lie of “land without people for people without land” to reshape world opinion in support of Israel. Instead of describing the establishment of Israel as European colonization of a country, and the ethnic cleansing of a nation, they focused on the “plight of Jews” in Europe.

The best-selling novel in America since “Gone with the Wind,” is Leon Uris’ 1958 blockbuster, “Exodus”. It was a story of two lovers, an American nurse and an Israeli ‘freedom fighter’ obsessed with rescuing European Jews who had survived the Holocaust. The novel was written by a Jewish American Zionist with a serious intent to reshape public opinion through Zionist propaganda about the birth of Israel. Israel’s first prime minister, David Ben-Gurion, described the novel: “As a literary work, it isn’t much. But, as a piece of propaganda, it is the greatest thing ever written about Israel.” It became a major motion picture; more than seven million copies of the book were sold in the US; it was translated into scores of languages read by millions in numerous other countries; and, for many months, it reached New York Times best seller list. The book was secretly translated by Jewish dissidents from the Soviet Union. Tens of thousands of copies were distributed, and, according to Zionist activist Leah Pliner, “the Samizdat version of Exodusbecame a source of inspiration among Russian Jews.”

“Exodus” was presented as a story of “heroism, sacrifice and redemption” that framed the story of Israel’s birth as a just and necessary accomplishment. The story of Israel resonates with the religious belief of devout Christians who constitute the Torah as part of their Christian scripture. In their minds, the distinction between Zionism and Judaism is rarely recognized. Supporters of Israel never cared to learn that Israel was born of the convictions of two men, Britain’s foreign minister Arthur J. Balfour, during World War I, and US President Harry S. Truman, when Nazi Germany surrendered in World War II. Balfour issued the Belfour Declaration in 1917, pledging the British government to foster “the establishment in Palestine of a national home for the Jewish people.” After the World War II, Truman deemed the plight of Jews in Europe a matter of the “highest humanitarian importance”, and pressured the British to implement the declaration and not limit European Jews’ immigration to Palestine.

Historians Allis Radosh and Ronald Radosh wrote, in their 2009 book, A Safe Haven: Harry S. Truman and the Founding of Israel, that Truman had interest in Palestine due to his deep religious belief since his childhood: “He had read the Bible a dozen times before he was fifteen.” Even if he was not influenced by his religious belief, Truman was a politician, no different from today’s US politicians, and there were even more activist Jews in the US than in Great Britain. The racially motivated stereotypes of the Arab and Muslim worlds were invented by Western colonialists and, propagated by their media, served as implicit support for the Zionists’ colonial ambitions in Palestine. And, at the same time, there were no impartial historians like Benny Morris and Ilan Pappѐ, or Arab intellectuals in the mould of Edward Said or Salman Abu- Sitta or Ramzy Baroud to tell the real story about colonizing Palestine.

As more archival material became available, the crimes and the expulsion of Palestinians, as a matter of historical fact, have been confirmed. An estimated 750,000 Palestinians had fled Palestine or been expelled from their homes by the Jewish military, and tens of massacres were committed. More than ninety percent of the inhabitants of Haifa, Tibrias, Beit She’an, Jafa, and Acre cities had vanished. “531 villages had been destroyed, 11 urban neighborhoods had been emptied of their inhabitants” and thousands of civilians were massacred, according to Ilan Pappѐ’s ‘The Ethnic Cleansing of Palestine’. Roughly 15 percent of Palestinians remained behind and became Israeli citizens, and all lost their property to expropriation. UN General Assembly Resolution 194 conferred the refugees’ right of return, but Ben-Gurion and all successive Israeli governments never had any intention of implementing it or, even, accepting the return of one single refugee to her/his home in Israel.

Israeli political leaders, the Zionist and the non-Zionist, the secular and the religious, the left-wing liberals and the right-wing conservatives all have one thing in common: They all have been indoctrinated with the notion that because a person is Jewish, a “special people with inherited noble blood!,” they are entitled to take Palestinian land. If there is difference, it is in how far each is willing to go to steal the land and abuse the natives. Some rabbis wrote that “it is no sin to kill the Palestinians.”

Even the so-called liberal political Israeli leaders, like Yitzhak Rabin and Shimon Peres, committed some of the worst acts of atrocities against civilian Palestinians, in the process of creating the State of Israel. Yitzhak Rabin, the future prime minister of Israel, the so called “most liberal’ Israeli politician and the recipient of the 1994 Nobel Peace prize, led the military unit that ethincally cleansed two prosperous and peaceful towns of their civilian Palestinians, inflicting great suffering upon the evicted men, women and children.

Rabin described his role in the 1948 expulsion of the Palestinians from the towns of Lod and Ramle, when he was the commander of the Harel Brigade. He wrote in his memoir: “While the fighting was still in progress, we had to grapple with a problem: the fate of the civilian population of Lod and Ramle, numbering some 50,000. [Yigal] Allon and I held a consultation. I agreed that it was essential to drive the inhabitants out. We took them on foot toward Bet Horon road. The population of Lod did not leave willingly. There was no way of avoiding force and warning shots in order to make the inhabitants march the fifteen miles to the point where they met up with the [Arab] Legion.”

The 1967 war that demolished pan-Arabism left Israel in full control of historical Palestine, including the West Bank and Gaza, and changed the image of the conflict, in the West, from one pitting the Arab world against tiny Israel to one pitting mighty Israel with its formidable military strength against the pitiful Palestinians. The Israel that used to accuse its enemies of denying the Jews a state, is now denying that same right to another people, the Palestinians.

A UN investigatory commission chaired by the Jewish jurist, Richard Goldstone, accused Israel of “crimes against humanity” during the three-week war on Gaza in 2009. Editor’s note: See video below. (WARNING — Content is extremely graphic in nature.)And, many human rights organizations and activists accused Israel of crimes against the Palestinians in the 2012 and 2014 wars on the people of Gaza, and for occupying, colonizing and enforcing an apartheid regime in the West Bank. Things came full circle after more than seventy years of establishing the permanent international court and “crimes against humanity” category in 1945, for the Nuremberg trials of thirteen surviving Nazi defendants, for the mass murder of Jews and others. Leaders of Israel who like to describe their state as “the Jewish State” stood accused of “crimes against humanity” during their war against the Palestinian refugees. The Israeli State that was widely admired by the West, for its resolution to “never again” allow Jews to be targeted, is now being denounced for targeting the Palestinians.

Many international bodies, including some in Europe and the US, joined the denunciation of Israel. They joined the Boycott, Divestment and Sanctions (BDS) movement which calls for the economic and cultural isolation of Israel until it complies with international law on Palestinian rights. British teacher unions have called for the academic boycott of Israel; the United Methodist Church’s General Board of Pension and Health Benefits announced its decision to divest from five Israeli banks it said failed to meet its 2015 investment criteria based on human rights; Norwegian supermarkets boycotted Israeli goods that are produced in West Bank settlements; and, former US President, Jimmy Carter has published a book accusing Israel of practicing apartheid.

Seventy years after 1947-48 “Nakba”, the Palestinians have won a moral victory. Crimes against them are finally called “crimes” !

Palestinian Injured After Losing Control of Vehicle at Checkpoint