A Moment That Changed Me: Carrying Out Kidney Transplants in Gaza 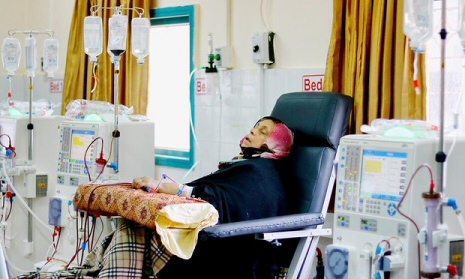 It is only a 20-minute walk, but crossing no-man’s-land at the Erez border control changes everything. Entering Gaza feels like gaining access to a state penitentiary; there are guards, automatic weapons, dogs, gates and the infamous wall, designed to keep the 1.85 million Gazans in, and everything else out.

Israel is an advanced country, with fantastic infrastructure and a healthcare system to rival any of those in the western world. Just a few miles down the road though, you see a different story. As an NHS doctor, working in a busy tertiary centre in Liverpool, I am used to working long hours, coping with staffing shortages, and the constant pressure. Despite this, I am proud that we provide quality healthcare for our patients at any time of the day or night, seven days a week. That’s why I wanted to help those not so lucky to have such a healthcare system.

My journey to Gaza began with a charity, the Liverpool International Transplant Initiative (LITI). LITI was responsible for the first kidney transplants in Gaza, and has performed 25 successful transplants there, now. As we made our way from the border to the al-Shifa hospital, the largest in Gaza, I couldn’t help but notice the buildings lying half-demolished and derelict along the way. The 2014 war had a colossal impact on the infrastructure of Gaza, and many people are still trying to recover. Al-Shifa hospital itself is little more than a large apartment block with no resemblance to the hospitals we know so well, in the UK.

Our aim, on this mission, was to carry out four kidney transplants, all live donors, from relatives of the patients. Living with kidney failure in the UK is a struggle, even with advanced support, three to four weekly dialysis sessions, regular follow-ups, dietitian input, specialist nurses, anaemia management and hospital transport. In Gaza, it is almost impossible. Suffering from kidney failure, here, means almost certain premature death. Dialysis centres are few and far between, and cater for numbers that are unheard of in the UK. This means that patients may only be able to dialyse once or twice per week, which puts an enormous strain on the body and leaves them with a substandard quality of life.

Our first patient was a 27-year-old woman due to receive a kidney from her brother. She had been admitted to the hospital three days previously, with pneumonia. And, even while talking to us at rest, she was extremely breathless. It became painfully obvious that this young lady was not fit for a transplant on this mission; her body was still fighting off the pneumonia. And, to put her through a huge surgery and immunosuppression would not be right. In Liverpool, this patient would receive antibiotics, her anaemia corrected and, in six weeks’ time, would be in the best shape possible to have her transplant. Unfortunately, this is not the case in Gaza, and I suspect that this woman may not be alive by the time we next fly out.

Daily life in Gaza is interrupted by regular power cuts, some of which last for hours. The hospitals supposedly have back-up generators which take over the power, but, in reality, this is not always the case. During one of our transplants, the operating theatre was plunged into darkness, and a familiar sigh from the Gazan doctors went round the room. I stood as still and silently as possible, not used to the pitch black during mid-operation, and waited for the generators to kick in.

The dialysis unit in the Al-Shifa hospital is a far cry from the highly polished, well slicked UK centres. There are four rooms, each with 12 old dialysis machines. The one nurse for each room runs back and forth between the patients, trying to keep the dialysis sessions running. One of the nurses explains how they have to cut the gauze into four, so that they have enough for all the patients. Back home, this would be unheard of. Ahmed, a 13-year-old patient, tells me how he has to get a taxi to the dialysis centre three times a week, from a neighbouring town, costing his family £18 each time. In a region where unemployment rates are as high as 50%, this is not sustainable for his family.

The most astonishing quality of the Gazan people is their ability to remain positive and enthusiastic despite everything they have been through: if you are six years old in Gaza, you are a veteran of three wars. We were taken to the town of Shuja’eyya, east of the centre, an area that was razed to the ground during the 2014 war. It is amazing how far the town has progressed, and how quickly signs of life have returned to the area. Children show their incredible spirit, playing in the rubble of their houses, swinging from trees and causing as much mischief as possible, while the young men work on the regeneration of the buildings.

Also of interest: 04/29/05 A Moment That Changed My Life by Saed Bannoura