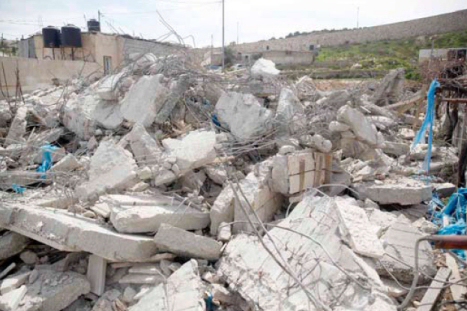 Israeli forces have continued to commit crimes, inflicting civilian casualties. They have also continued to use excessive force against Palestinian civilians participating in peaceful protests in the West Bank and Gaza Strip, the majority of whom were youngsters. During the reporting period, Israeli forces killed 4 Palestinian civilians, including 3 children, in the West Bank. One of them was killed in Qalandya refugee camp, north of occupied Jerusalem, another was killed at “Beit Eil” military checkpoint, north of Ramallah, while the 2 others were killed in “Eli” settlement, south of Nablus. Moreover, they wounded 20 civilians, including 3 children. Thirteen of them, including a child, were in the West Bank, and the 7 others, including 2 children, were in the Gaza Strip. Concerning the nature of injuries, 11 civilians were hit with live bullets, 6 were hit with rubber-coated metal bullets and 3 others were hit with sound bombs.

In the West Bank, Israeli forces killed 4 Palestinian civilians, including 3 children, and wounded 13 others, including a child. Seven of them were hit with live bullets and 6 others were hit with a rubber-coated metal bullet.

In the Gaza Strip, on 27 February 2016, Israeli forces arrested 3 Palestinian civilians, who attempted to sneak into Israel through the border fence between the Gaza Strip and Israel, east of Rafah City, to look for work. They were taken to an unknown destination.

On 26 February 2016, “Ateret Cohanim” organization delivered the heirs of Abdul Majeed al-Rajabi judicial notices to vacate their land in Batn al-Hawa neighbourhood, in Silwan village, south of East Jerusalem, on which 12 apartments are built. The organization claimed that the land belongs to 3 Jews from Yemen, who used to live in that land before 1948. It should be noted that the 12 apartments shelter 93 persons, including 64 children.

On 27 February 2016, officers from the Israeli municipality and police moved into Ein al-Louza neighbourhood, south of East Jerusalem. They photographed the streets and some buildings and then fixed a number of administrative demolition notices to some residential buildings.

On 25 February 2016, Israeli bulldozers demolished industrial and commercial facilities and confiscated a mobile house in al-Muhalel in Na’lin village, west of Ramallah. The demolition was carried out against 10 stores.

On 29 February 2016, Israeli bulldozers demolished 4 residential tents, 2 livestock tents and 2 livestock barns in al-Farisiya area, north of Jordan Valley, east of Tubas. It should be noted that these facilities were donated by the Palestine Red Crescent society (PRCS) after a demolition that was carried out in the same area on 11 February 2016.

On 02 March 2016, Israeli forces demolished Kherbet Tana, east of Beit Foreek village, east of Nablus. They demolished the only school in the Kherbeh, 2 caves, 2 barracks, 10 residential tents and 6 livestock tents. The demolished tents and other facilities belong to 12 families consisting of 68 individuals, including 29 children.

On the same day, Israeli forces demolished an underconstruction house in al-Shweika suburb, north of Tulkarm, belonging to Khalil Ahmed Mohammed Ali (44). It is worth noting that the house was 2 kilometres away from the electronic fence, which is part of the annexation wall.

5. PCHR calls upon the High Contracting Parties to the Geneva Conventions to fulfil their obligation to ensure the application of the Conventions, including extending the scope of their jurisdiction in order to prosecute suspected war criminals, regardless of the nationality of the perpetrator and the place of a crime, to pave the way for prosecuting suspected Israeli war criminals and end the longstanding impunity they have enjoyed;

13. PCHR calls upon the European Union to activate Article 2 of the EU-Israel Association Agreement, which provides that both sides must respect human rights as a precondition for economic cooperation between the EU states and Israel, and the EU must not ignore Israeli violations and crimes against Palestinian civilians.