Army Injures A Palestinian Near Bethlehem, Kidnaps Another 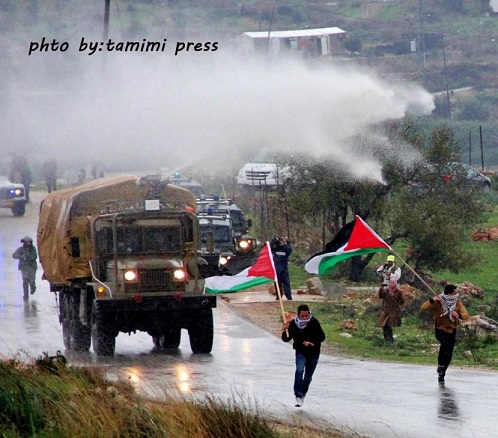 Israeli soldiers invaded, on Sunday at dawn, the al-Khader town, south of the West Bank city of Bethlehem, shot and injured one Palestinian and summoned three others for interrogation. The army also kidnapped a Palestinian from the town, as he was crossing a military roadblock.Media sources in al-Khader said several military vehicles invaded the town before the soldiers stormed and searched a few homes, causing property damage.

The invasion led to clashes between the soldiers and local youths, who hurled stones and empty bottles on them while the army fired several live rounds, rubber-coated steel bullets and gas bombs.

A young man suffered a moderate injury after the soldiers shot him with a rubber-coated steel bullet in his leg, and many Palestinians suffered the effects of teargas inhalation.

In addition, the soldiers summoned three Palestinians for interrogation in the Etzion military and security base, south of Bethlehem, after invading and searching their homes.

The soldiers also interrogated them, and their families, prior to abducting them.

The three have been identified as Hazem Jom’a Salah, 40, Mohammad Khader Mousa, 25, and Mohammad Rebhi Mousa, 30.

Furthermore, soldiers stationed at the Container Roadblock, northeast of Bethlehem, kidnaped a young Palestinian man, identified as Mahmoud Nasri Salah, 24, from al-Khader, after stopping a car and searching it.

He was interrogated before the soldiers cuffed and blindfolded him, and kidnapped him.