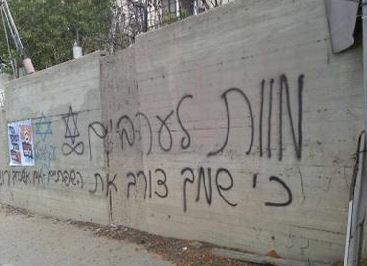 A number of extremist Israeli settlers infiltrated, on Thursday at dawn, into the al-Khader town, south of the West Bank city of Bethlehem, and wrote “Death To Arabs” graffiti on the walls of a Palestinian home, and nearby walls. Soldiers also invaded a school near Bethlehem.Hassan Brejiyya, the coordinator of the Popular Committee against the Wall and Settlements in al-Khader, said the illegal settlers wrote the graffiti on the exterior walls of a home belonging to resident Mohannad Sa’ad Salah.

The assailants also hurled stones on the home, while Mohammad Salah, his wife and their daughters, were in their residence.

He added that the graffiti included “Death To Arabs,” and “Leave,” among other threatening statements.

Brejiyya also stated that the settlers cut through the barbed-wire fence, separating al-Khader from Daniel illegal colony, built on Palestinian lands, and wrote the graffiti.

The home has been subject to frequent attacks, over the past seventeen years, especially since the settlers are trying to push the family into leaving their property, so that they can expand their illegal colony.

In addition, at least four Israeli military vehicles, surrounded on Thursday morning a school for boys, in Teqoua’ town, east of Bethlehem, and invaded it.

The soldiers claimed they were looking for Palestinian who allegedly hurled stones on their vehicles; the soldiers left the school later without conducting any arrests.