Army Invades Al-‘Isawiyya And Silwan In Jerusalem, Kidnap One Palestinian 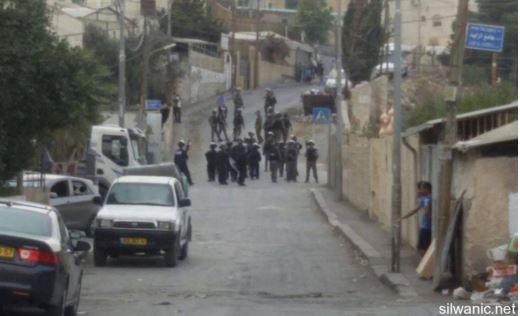 Israeli soldiers invaded, on Wednesday at night, and on Thursday at dawn, the Jerusalem towns of al-‘Isawiyya and Silwan, and kidnaped one Palestinian. Clashes took place in the invaded towns, and many Palestinians suffered the effects of tear gas inhalation.The Wadi Hilweh Information Center in Silwan (Silwanic) has reported that the soldiers invaded the family home of Fuad Abu Rajab, and his father’s bakery, and violently searched them.

Silwanic added that the invasion led to clashes between the soldiers and local youths, who hurled stones and empty bottles while the army fired gas bombs, concussion grenades, and rubber-coated steel bullets, causing many Palestinians to suffer the effects of teargas inhalation.

On Wednesday at night, the soldiers invaded the home of Eyad Amjad Shweiki, in Ein al-Louza neighborhood in Silwan, and kidnapped him.

Clashes also took place in the main road of the at-Tour town and fired many live rounds, gas bombs and concussion grenades many local youths hurled stones, empty bottles and several Molotov cocktails on them.