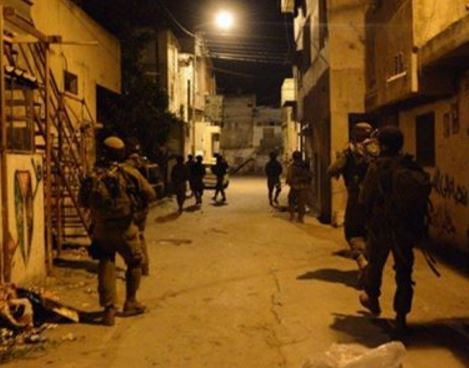 The Palestinian Prisoners Society (PPS) has reported that Israeli soldiers have kidnapped, late at night and on Thursday morning, 33 Palestinians in different parts of the occupied West Bank, including Jerusalem, and that the arrests were mainly focused in the West Bank district of Qalqilia, Nablus and Hebron. Among the kidnapped are a father and his four sons. In Qalqilia, in the northern part of the West Bank, the soldiers stormed the towns of Azzoun, and Hajja, and kidnapped eleven Palestinians, identified as Ward Adwan, 22, Sa’id Farouq Abu Haniyya, 22, Yahya Mohammad Abu Haniyya, 20, Abdul-Hafith Ali Adwan, 22, Mustafa Sufian ar-Reyashi, 19, all from Azzoun, in addition to Mohammad Abdul-Qader Masalha, 55, and his sons, Tha’er, Ala, Baha’ and Rabea, (24-30 years of age,) and Fahd Wael Masalha, 23.

In Nablus districts, also in the northern part of the West Bank, the soldiers kidnapped ‘Aqeel Issam Faraj and his brother Ahmad, in addition to ‘Aahed Husam Faraj and Assem Fathi Faraj, all from Iraq-Burin town, and Omar Salah al-Jawhari, from Nablus.

In Hebron district, in the southern part of the West Bank, the soldiers kidnapped Mohammad, 30, and his brother, Nasr Abu Hadeed, 23, Fadi Mohammad Shawar, Yacoub Khalil Za’areer, 35, from the Sammoa’ town, in addition to Khaled al-Jondi from Yatta town.

In Bethlehem, the soldiers kidnapped Yousef Naim Ghneim, from the al-Khader town, while Mohammad Omar Musleh, 17, was kidnapped in the al-Jalazoun refugee camp, north of Ramallah, and Ashraf al-Karaki, 17, from ar-Ram town, northeast of Jerusalem.

It is worth mentioning that the Israeli police and army have kidnapped, overnight, 60 Palestinian workers for what Israeli sources claimed “entering Israel to work without permits.”

25 of the detained workers were detained in the northern part of the country, 15 in the coastal area and the rest were taken prisoner in the Negev.

The police have detained and imprisoned more than 250 Palestinian workers in the past few days, the PPS said.